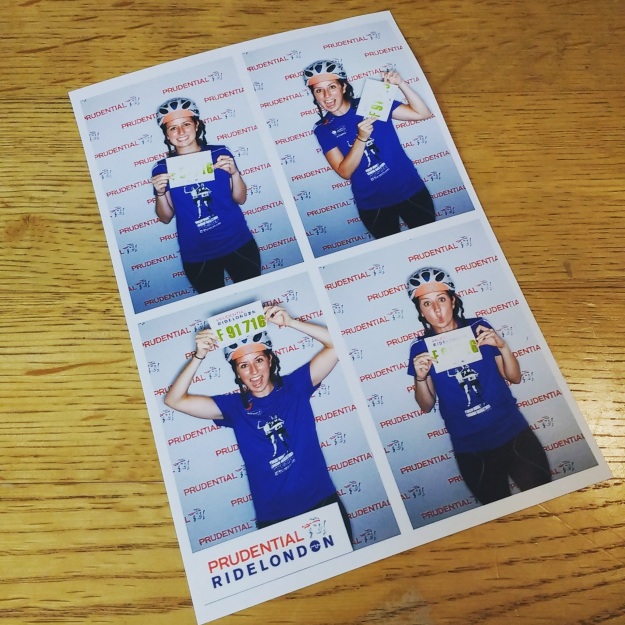 Ride London has put on the 100 mile sportive for a few years now, as with all big events it’s a ballot and as with all ballots I always enter *just to test my luck.* Keeping with tradition I always get the Hey Loser! magazine on my doorstep each year and don’t really think too much about it.

This year after my Hey Loser! magazine came they announced they’d be putting on a shorter 46 mile sportive on the same closed roads essentially missing out the Surrey Hills. My friend Emma, who has in the past also convinced me to enter the London Brighton Night Ride and London Duathlon, was keen so we entered the ballot for the 46. I say ballot but I think it was like the Paris marathon ballot in which everyone gets in, lucky us. Paying for a 46 mile sportive isn’t usually something I’d budget especially for, but being a part of the bigger event and the chance to cycle on closed roads convinced me it would be worth it.

I found myself googling cycle superhighways to the ExCel centre on Friday after work trying to get to the expo to pick up my race pack. I was pretty grumpy about having to go all the way out east to pick up a race pack for a 46 mile sportive until my friend Helen suggested we make an evening out of it and after sampling the best free food the expo has on offer, jump in the water at the Royal Docks OWS for a few laps in the sun. Suddenly it was the perfect Friday night.

Race morning saw my friend Emma and I furiously checking googlemaps and the unhelpful photo map on the Ride London website as to where our wave was to start. Ride London PLEASE create an interactive map for next year. Stratford is massive and no one wants to be cycling around in circles all morning. We ballparked it and cruised down the canal for 7 miles to our green start. Having to be “in” our pen an hour before our wave start was a bit hurry-up-and-wait but it was sunny so couldn’t complain.

A lot of slow-stop-start-cycling lead us eventually into a start funnel. We had chose at sign up to start in Women’s Wave 1 which was awesome as we were surrounded by awesome women with the nicest bikes and coolest kit ever. The only disappointment was that Ride London didn’t mention it or even do anything to acknowledge it. At the start the announcer even said we were the Teach First charity wave and spent a few minutes congratulating the CEO for being at the start. BORING. A major opportunity to promote women’s cycling missed AGAIN (but who’s counting… just me).

The riders at the front got to choose our start music and even though we were hoping for Katy Perry, We Will Rock You was chosen and it was actually awesome. The almost-all-male wave beside us was totally jealous. The first bit through East London was pretty fun. Getting to cycle fast (not like really fast, but fast for a city commuter like me) was great and Emma and I couldn’t stop smiling. The route followed big roads for cars so it was almost like seeing a new part of London. The novelty of no-cars didn’t wear off the whole time, it was glorious to cycle without worrying about who was coming up behind you, if they’d cut you off before the next parked car, would that parked car open it’s door, or sticking like glue to the left curb. 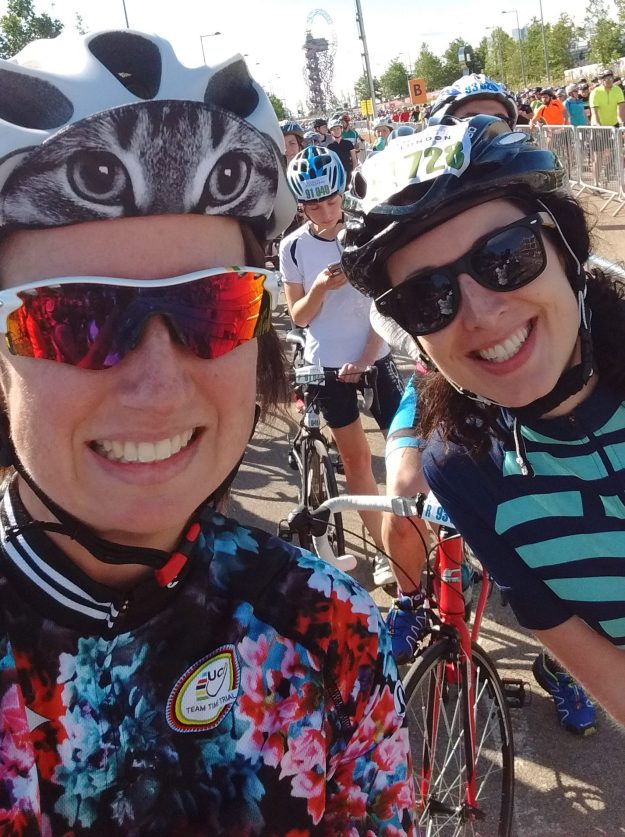 We started just after 9 so there weren’t many people out as we cycled through Central London but the ones who were had cowbells and were really sweet cheering everyone on. Emma and I got a lot of “Yeah go girls!” cheers amid the sea of lycra’d men. Unfortunately, from the start we saw a lot of accidents. More than I expected to see, especially at the social end of the 46 mile event. Staying safe ourselves we kept chatting all the way as we headed out west trying to figure out where we were (Hammersmith Flyover? What? People who drive know so many different places in London!) The sun was out and we were keeping up a decent speed and really enjoying the riding. Out of nowhere we entered Richmond Park, which was beautiful as always. Again, with no cars it is literally the perfect place to be on a weekend. Sawyers Hill was lined with spectators doing their best TdF impressions (major kudos to the guy with the massive cow bell) to help us up the hill.

A few miles after Richmond we pulled into the first Hub stop. It was so well organised with bike parking, lots of toilets and loads of water/electrolytes and FOOD! I had at least 3 fig rolls and 2 loafs of banana soreen (with a few extra in my pockets #justincase). Probably overeating for the final 20 miles but it was tasty… We slightly dawdled at the Hub enjoying the sun and a brief break for our bottoms since we weren’t in a hurry or close to the sweeper-van time. Back on our bikes we found our legs again and endured the uneven road through Thames Ditton (ugh) back through Kingston and then on the road back to London. The speedy Ride 100 riders were with us at this point and made for some exciting whizzzz-whizzzz peletons speeding by, we contemplated how long we’d be able to keep up with one but considering they were going at least double our pace we weren’t sure we even had the gears to make it possible. Most people were pretty good with the fast groups organised into peleton groups sticking to the right to pass and the rest of us on the left. The only problem came when fast solo riders who were not in a group for whatever reason (I could say so many things) were riding fast and weaving in/out of the slower riders. But, I always remember that these people are dicks in all aspects of their life, not just cycling.

Riding over Putney Bridge and back along the Northbank into Central London was great. Emma and I had been chatting the whole time and couldn’t stop smiling. My legs were tired, and I was glad I wasn’t doing the 100 (not like I’d trained for it though). We decided the 46 was the best event for having fun but also pushing yourself more than you probably would. Plus. Closed Roads. I can’t say it enough. They just make cycling SO MUCH BETTER.

We turned into Trafalgar Square and down the mall (opposite way of the marathon!) and I managed some no-handed celebrating (no one passed me champagne though – Chris Froome is really lucky) before we cruised over the finish line.

After collecting our goodybags and bag check we found some grass in St. James park and met our friends for a much needed lie down and picnic. I finally had my glass of prosecco (thanks Matt!) and a McDonalds cheeseburger. Recovery of champions! 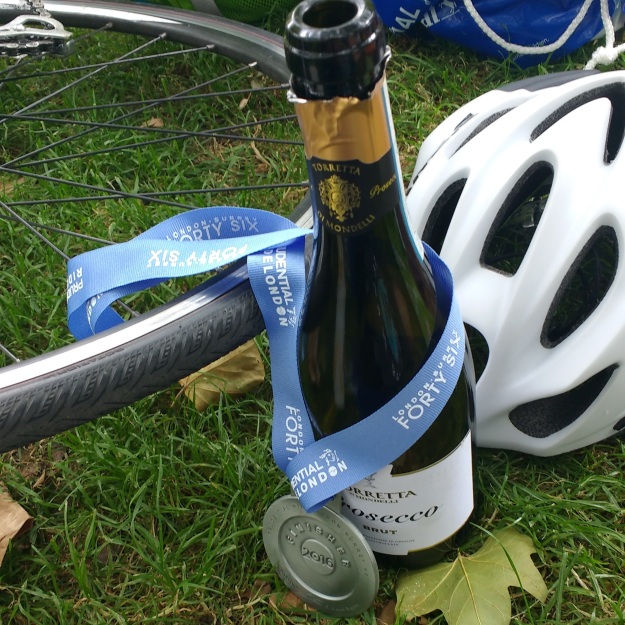 Overall I give 10/10 to Ride 46 for a great event. I’m not a competitive cyclist, nor do I want to be, and this event was the perfect balance of challenge and fun to get out and do a longer ride than I usually would have.