I haven’t blogged much about being pregnant and pregnancy but when I have spoken up it’s been to remind everyone that pregnant women are still individuals and there is no one piece of advice that should be given by medical professionals, fitness professionals, or well meaning friends and family.

The only advice I will demand you listen to is to buy Birkenstocks. They are the most comfortable things ever.

Just like there is no one-size-fits-all pregnancy, I’ve found there is no one size fits all pregnancy yoga class. Almost everywhere you turn once you get pregnant is advice to practice pregnancy yoga. There are so many benefits to doing yoga while pregnant, relaxation techniques, breathing control, movement, stretching, active recovery, you name it yoga has it. But, the advice “go to a yoga class” is so general and I’ve found there is a huge difference in the types of yoga you can practice while pregnant and the classes offered. Below is a quick review of the classes and styles I’ve practised in the past 6 months to hopefully add a bit more to the conversation and help women make their own choices in a healthy pregnancy.

Obviously the classes I’ve taken have all been in North London and close to home. Above every benefit of doing pregnancy yoga, convenience is key. If the specific classes aren’t relevant to you then hopefully you can take the themes from each one and use them in your search. 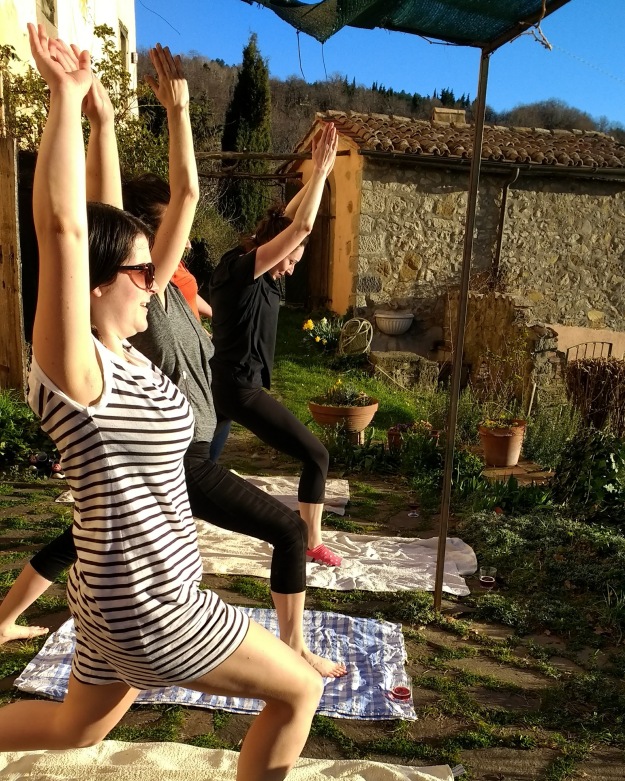 Fitting in 5 minutes of yoga where and when you can each day is better than any class you can take. These wise words are from my friend Erin and just so true. The early days of pregnancy can be a roller coaster and getting to a yoga class might not be in the cards. Simply putting your legs up the wall for a few minutes or doing one or two of these prenatal yoga poses will help. Personally I have found the side stretch to be a life saver. Anything that finds more space between my hips and my shoulders feels amazing.

Yoga classes can be pricey and while I think it’s money well spent during pregnancy, it’s not always in everyone’s budget so don’t feel like you have to pay for a class to get the benefits.

Speaking of expensive classes, Triyoga is up there with one of the most expensive studios I’ve ever attended. Their Camden location is huge though and I think could stand alone as a self-sufficient yoga city if all else crumbles around it. I had a few recommendations for their pregnancy yoga offerings though so used their £40/30 day introductory offer to try them out.

I started these classes around week 20 due to some travel and life commitments before, but also because I didn’t really feel like I needed pregnancy yoga before that since I was still doing my regular weekly yoga classes, running, and going to the gym.

That said, I learned that of the benefits of pregnancy yoga is meeting other pregnant women and the information shared in the class. Some of that information needs to be taken with a grain of salt, but I found them to be a nice chance to just be pregnant after long days and weeks operating out in the non-pregnant world (if that makes sense!)

Triyoga class 1 – Wednesdays at 6:15pm at the Camden studio

This was my first pregnancy yoga class and after the first class I’m not sure I would have kept attending any pregnancy yoga classes if I didn’t have the 30 day pass. The class started off great with some amazing bolster positioning for maximum relaxing, but then as the class went on there was a lot of unstructured talking and not a lot of moving. Each week we did some very useful breathing exercises (which I still practice today) and some classes did some partner massage practice.

No one yoga teacher is going to be perfect but I saw a warning flag when this teacher said to a student, “I wish you’d reconsider your planned cesarean and at least try a vaginal birth.” Like I said above, expert or not, I think pregnancy should be led by the individual and each choice positively supported by those around her.

Through the classes there was a lot of time to bring up anything that you wanted to talk about and the teacher had so much experience to draw from, but I personally just didn’t gel with it all. I continued to go to this class for the 4 weeks and am glad I did as I enjoyed some of the classes and learned a few things. Overall though it just wasn’t my cup of tea though.

Triyoga class 2 – Saturdays at 11:00am at the Camden studio

A friend recommended this class before I was even pregnant. The teacher, Nadia, is very well known in London as a pregnancy yoga teacher and Doula and a lot of people come from around the city to her classes.

Nadia’s class is everything you could want in a pregnancy yoga class. No nonsense advice, funny anecdotes “Think of it like getting ready to have sex, I know all of you in this room have done that at least once” touching moments of reflection (that even left me crying one day!), and a really really good workout that gets your body moving and feeling so much better than when you walked into class. 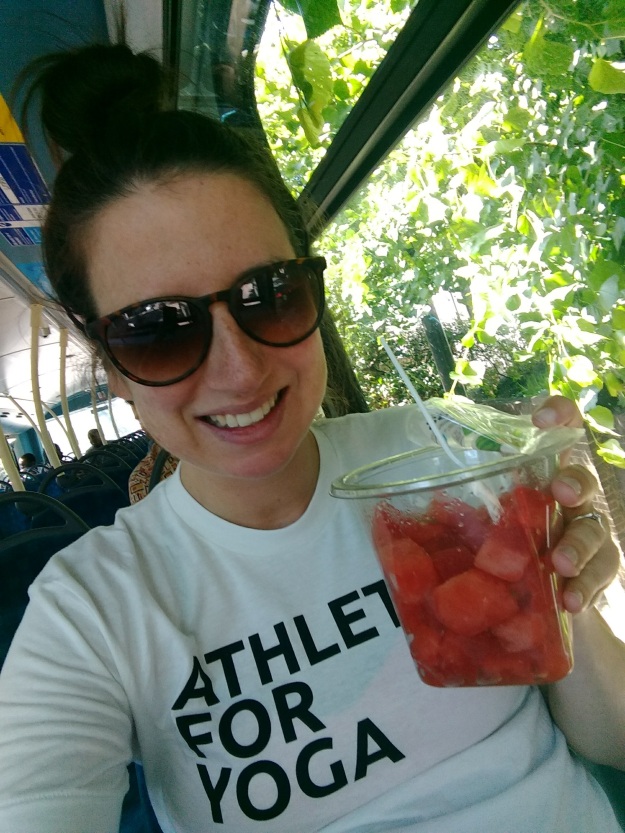 There is a lot of information shared in Nadia’s classes but it is structured in a way so you still are moving and there isn’t any wasted time. It all seems well planned out and the class flows well. For a large class with one teacher she seems to always be there adjusting those who need it and offering advice from her wide network.

For my entire life I thought it would be the worst to be pregnant over the summer. Wrong. It’s the best. Flowy dresses, birkenstock sandals, swimming in lidos and lakes, and outdoor yoga classes make it totally worth the stuffy hot tube rides.

I saw a flyer for Mindful Moments pregnancy yoga classes in Finsbury Park (in the winter they’re indoors at the athletics track) on Saturdays at 11:15am but they clashed with the Triyoga classes above. These classes are closer to my flat and outdoors, so I waited to try them once my Triyoga membership was up.

I went to my first class on Saturday and it’s already my favourite class. The flow of the class is great and we were always moving (not strenuously but stretching, breathing, etc.) and included some nice yoga flows that really got you up and energised. The teacher was really clear and helpful with adjustments for each student since we were such a wide range of weeks. Plus, there was a box of chocolate passed around after savassana. Could life get any better? 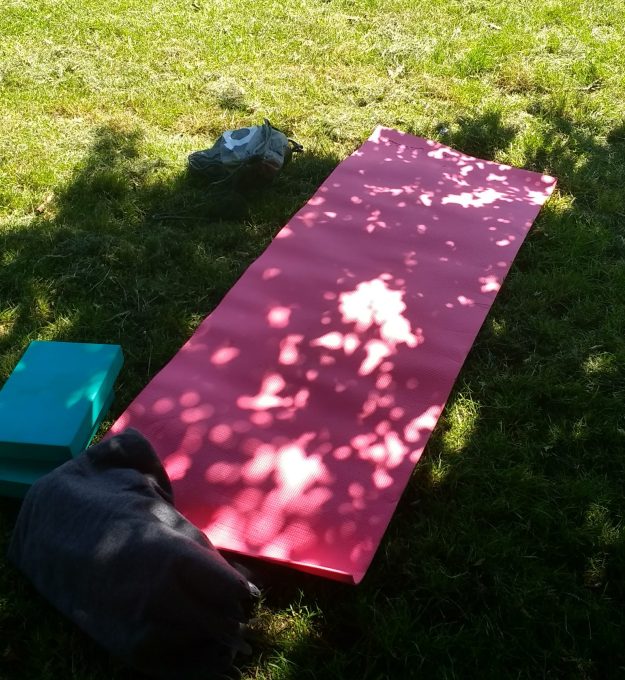 Nothing can beat doing yoga under a massive tree on a sunny, warm morning so I might be a bit biased but if you are pregnant during the summer I suggest you take advantage of the weather instead of working against it!

Not pregnancy yoga, but I have been practicing ashtanga yoga every week for almost 3 years now and once I was pregnant I kept that up. I told my teacher around 11 weeks, and he mentioned that it’s not advised to do ashtanga yoga during the first 12 weeks, oops but I had found it fine and my midwives hadn’t said anything about stopping it. That said do check with your own teacher & medical professionals first!

Right away I was given some modifications to do (no twists, no bandas, shorter stride length, etc. which for the first few weeks felt like I wasn’t even at yoga class. It was SO BORING. But week after week the modified ashtanga class felt harder and harder and I’m at the point now at 27 weeks where I’m modifying the modifications! I still love it though and with the support of my great teacher (he even opens a window just for me on the hot days!) I hope to keep this class up. I’ll need my Chatteranga arm muscles for lifting that baby once it comes.

Don’t be afraid of continuing non-pregnancy yoga classes as long as you have a comfortable and open channel of communication with your teacher.

*Update* I’m still doing a weekly (sometimes twice weekly) Ashtanga practice at 34 weeks and while modifying the sequence more and more (no more upward dog – lots more child’s pose) it’s often the best hour of my week and beats sitting at my desk. Like how yoga benefits running, it gives my body the opportunity to move in different ways than usual and I still definitely feel the benefits.

I signed Alex and I up for the 2.5 hour Couples Yoga class at the Active Birth Centre mainly because yoga had become such an important part of my pregnancy I wanted to share that with Alex so when it came to the later stages of pregnancy and labour he would know why I was insisting on being in certain positions and learn a bit about the benefits of yoga overall.

The class is taught by the centre founder Janet Balaskas, who has an impressive history of yoga, pregnancy, birth, and post-natal training. She was one of the first people to campaign the NHS to allow women to move around (and not be required to stay on a bed) during labour. There were about 20 people in the class (in the one I attended it was all pregnant women and their partners but all are welcome with any partner or not) and it took place in the impressively kitted out classroom that had every single yoga prop you could want. Finding a way to be comfortable during this class is not a problem.

The class went through relaxation exercises, yoga positions for labour, and some massage techniques. There was a tea & biscuit break in the middle, and some handouts to take home at the end. Overall I felt it was more of a preparation for labour class than anything yoga-y. We didn’t do any yoga sequences and other than practising a few variations of childs pose, didn’t really even do as much yoga as a normal pregnancy yoga class. I’m never going to complain about relaxing on bolsters and getting massages for 2.5 hours, but it wasn’t what I was expecting. There’s still a gap in the market for a “bring your partner to pregnancy yoga class” class in my opinion.

Alex himself said that after the class he still doesn’t find yoga “relaxing” and would rather go to a spin class (we are complete opposites there) but did enjoy the massage practice (duh) and thought it was good to go to this kind of class together to at least try it out.

The classes are only every 8 weeks and almost always sell out so I recommend booking in to them early if you’re interested. It’s £70 for a couple so not cheap at all either. I love what the Active Birth Centre does and want to support them so was OK with the price but do think it is prohibitively expensive for a lot of people already impacted by the extra costs of pregnancy and childbirth. 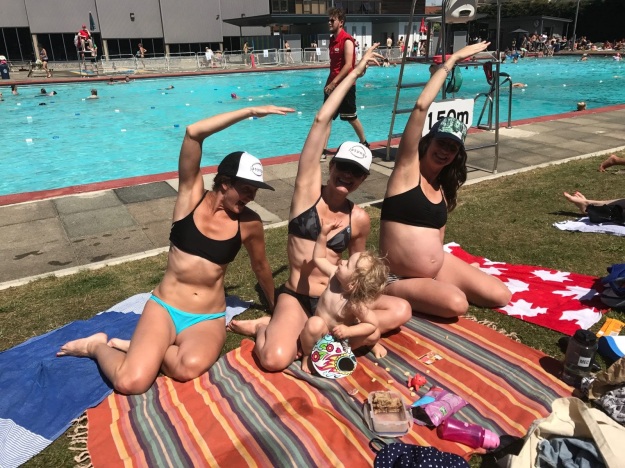 So, overall I’d say do some yoga while you’re pregnant, but don’t think you have to go to certain classes just because. There are a lot of options out there and the benefits can be found from just a few minutes of your own practice wherever, and whenever you find the time.