I may have conquered the cycling part, but need to work on my victory pose

On Saturday night I lined up with 3000 other cyclists in our best (and most padded) bright lycra and headed out from Clapham Common towards Brighton on our bikes.

As a novice cyclist I had done a few 30 mile weekend rides (with pub garden breaks) and the odd cycle commute but nothing as far, hilly, or dark as this.  My friend Emma convinced me to sign up and train for this, but a last minute bout of tonsillitis kept her in bed, so I woke Alex up on Saturday morning with the question, “Want to ride 60 miles with your wife even though you haven’t been on a bike in a few months… tonight?” Being the amazing husband he is he agreed and we headed to the bike shop to get some last minute additions to his gear.

I ended up borrowing Emma’s bike and Alex rode ours.  Emma has a women’s road bike and I really noticed the difference from our men’s hybrid that I usually ride.  The frame is a bit smaller so I sat much more forward and holding the lower part of the handles and breaking was much easier.

I wore my H&M padded cycling tights, lululemon run swiftly tshirt, Nike free-TRX shoes, padded gloves, and brought a windbreaker and sleeves to wear if it got a bit cold (hard to imagine in the sweltering 25 degree heat of Saturday).  More importantly I had packed a cliff bar, jelly babies, Cliff shot blocks, and a tube of Nuun to keep me moving all night. I’ve never really exercised more than 2 hours (for a half marathon) and I had heard of hitting the wall so I wanted to be sure I could keep going for the predicted 4-6 hours.

The first third of the ride was through South London and short of a few annoying night busses the roads were nice and clear for us and we breezed through the city.  We started in waves, so it was never too busy on the roads but you never felt you were riding alone and getting lost.

There was a steady climb up Woodmansterne from 10-12 miles and I was surprised to see a lot of people walking up. Considering we still had 5 hours of riding and many more hills according to the elevation chard ahead of us I was worried they’d be in for a long night.  The first rest stop was welcome as I was starving and devoured a cliff bar and a bottle of Nuun.  There were loads of porta-loos and burger trucks if you were so inclined, but we wanted to keep our momentum going and set off quickly. 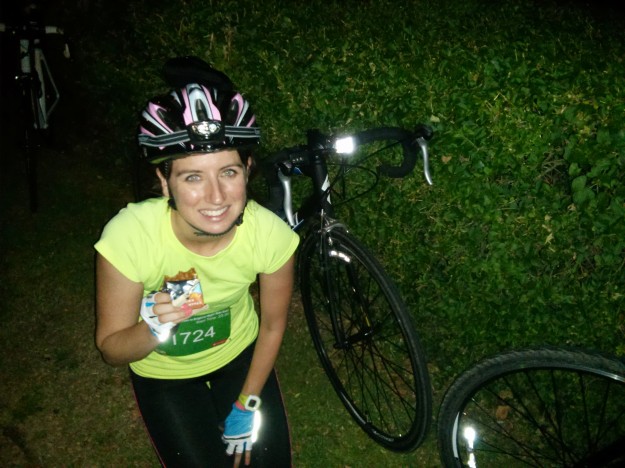 Things quickly got difficult as we almost immediately hit How Lane, the big steep hill that goes on and on and up and up.  It was weird in the pitch black as all you could see were blinking red lights ahead of you but not the actual road, so you just kept going and hoping it would level out around the corner.  The descents were insane in the dark and I was surprised (horrified) at how fast some people were going. I guess confidence builds speed, but I had to hold on my breaks quite a bit as I couldn’t quite get my balance in the dark and didn’t want to wobble over into a ditch at 30 miles/h.

It was so lovely and quiet along the country roads at this point.  The sky was full of stars (for London standards) and it was so peaceful to cycle. This is one huge plus for a night ride. The lack of traffic makes it way more enjoyable in my opinion.

This bit of the route seemed to drag a bit but we finally reached the second rest stop and I was getting that dizzy-eyed-on-a-cycle-for-too-long feeling so it was very welcome.  Again, no line-ups for the loos and lots of space to relax and stretch the miles out of your legs and back.  I had heard horror stories of poor organisation on mass rides, but I was so impressed with BHF’s on this occasion.  I ate about 20 jelly babies in 1 minute and then was magically ready to get back out there.  Alex was doing so well for someone who hadn’t cycled in a long time and lead a lot of the way from here keeping a great pace.

Up and up again on what seemed like a million mini climbs and descents until the big descent down to Wivelsfield and the last rest stop of the ride.  There was a lovely volunteer directing us to “breakfast” and I smelled bacon so I thought we were getting a quick bite before the big ride up Ditchling Beacon, but again just a few burger trucks and loads of water so I stuck to more jellybabies.

As the sun came up we enjoyed the rolling hills through the farms around Ditchling and I had hope that after every hill we had indeed already conquered the infamous Beacon. No dice and as we approached the road up the Beacon (totally closed to traffic) I saw so many people walking their bikes up I knew this had to be it. 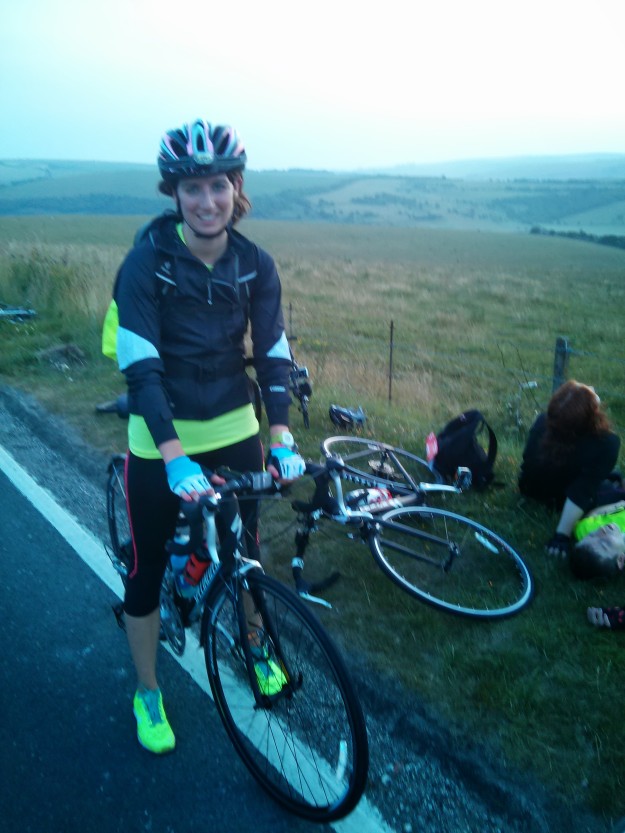 I had just enough left in my legs to push up and up and then saw the crest of the hill just ahead, the sight gave me that little bit more push and I made it up without walking… Yay! or so I thought.  A short zooming downhill brought us to the next and last bit of the Beacon, the steepest hill known to man. (At 5am it looked like it, trust me) I was so mad at myself for using up all my energy too early and made it 1/3 of the way up this steep and finally got off the bike to walk the rest.  At the top of Ditchling everyone was stopping to take pictures of the sun rise (we timed it perfectly) and catch their breath for the all-downhill road to the finish.

As per @lazyrunninggirl wear a marathon shirt when doing a new sport so at least they know, “you’ve done a marathon”

There were a few loud drunks shouting at us as we rode along the seaside to the finish line but we finished in a speedy 5:02 of riding time and just over 6:00 overall time.  As soon as we were done we headed straight to the beach to lie down and let our bodies stretch back into normal standing position. It was HOT for 6am and Alex even went for a swim. 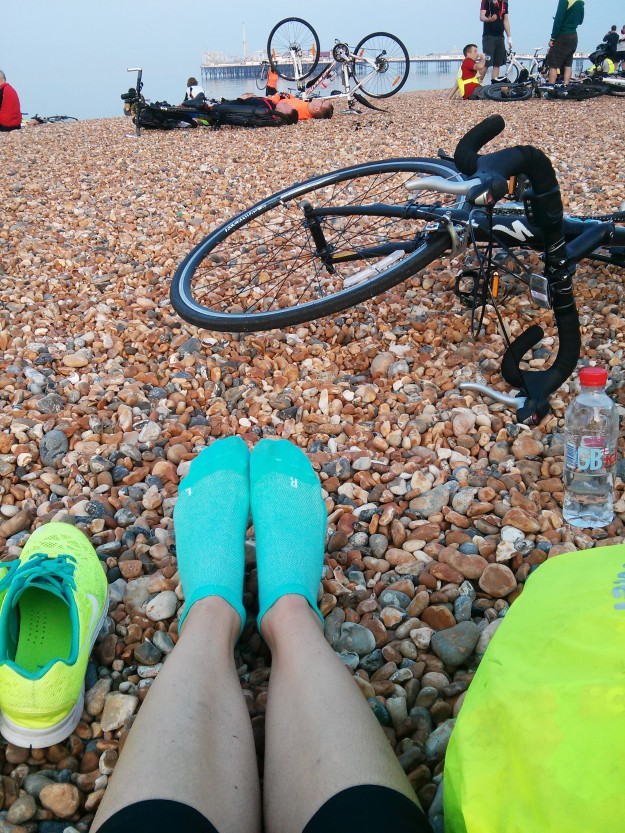 A quick bite at the takeaway (8am fish & chips is always a good idea) and we were on the bus back to London with no issues and lovely organisation.  The lorry with our bikes met us at Clapham Common but of course TfL shut the overground from Clapham High Street the one day we needed it, so we were stuck cycling even further to catch it at Clapham Junction.

Overall: It was a perfect ride in perfect weather with perfect company! Such a good introduction to cycling sportives and longer rides.  Today I’m barely able to move I’m so stiff, but at the end of the ride I mentioned that I’d like to try another one and am looking at all the rides that Breeze is offering this summer. 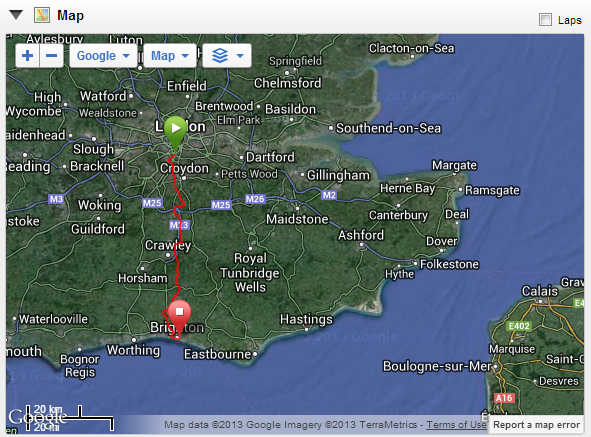 13 thoughts on “London to Brighton”