Laps get a bad rap. Everyone complains about races with laps, and no one thinks, “Wow I’m so excited to do 50+ laps of this 30yrd pool”

But my weekend was filled with laps and it was awesome. 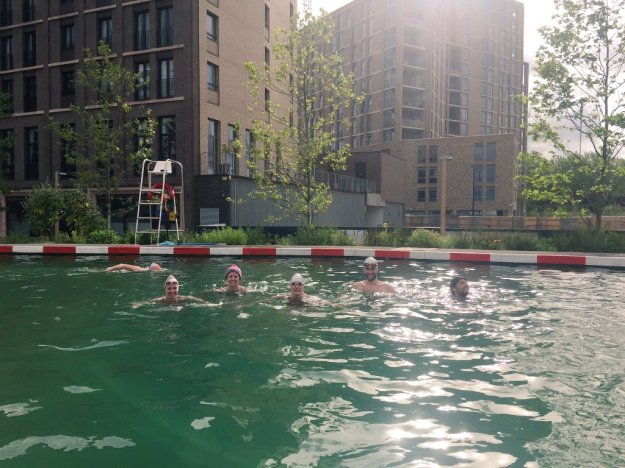 On Friday I did 1 lap of the Kings Cross Pond with Manda & Team Mermaids celebrating her last day of work before maternity leave!

On Saturday I stood in Lane 3 and watched Britain’s best 10,000m runners do 25 laps each in a few races culminating in the men & women’s Olympic Trials race. The men’s race was first and pretty exciting once the pacers dropped back, but none of them finished under the standard.

The main event of the night was the Women’s race with Jo Pavey wearing #1 and trying to qualify for her 5th (!!!) Olympics. As one tweeter put it, she was wearing her Exeter Harriers club vest that was probably older than some of her competitors! The race was full on from the beginning with an early breakaway group and then a few amazing moves in the last 1k by Jess Andrews. She looked SO strong through the finish it was such a great race to be right up there with my cowbell cheering them all on.

Waking up with the sun on Sunday I jumped on my bike and glided the 8 minutes downhill to the West Reservoir for the first Splash race of the year. It’s my third year taking part in a Capital Tri race and I love them so much. They’re so well organised they seem effortless, but you know a lot of work has gone into them.

Josie, Helen and I were signed up to the 1.5k Splash and suitably full of nerves and listing off a few excuses as we zipped up each other’s wetsuits we made our way to the dock and into the fresh 16*C water. Letting the cold water in through the neck really was the worst part as we quickly warmed up and after a quick wave we were off.

I then had the best start to a swim race I’ve ever had (including the pool trialthon last week!) Everything felt great and my breathing was spot on right from the start. I was even sighting well for the first few buoys! Within the first 100m I decided to do the full 2 laps of the 1.5k course (until then was still wavering on dropping down to 1 750m lap) and just kept riding the awesome swim rhythm I had going. 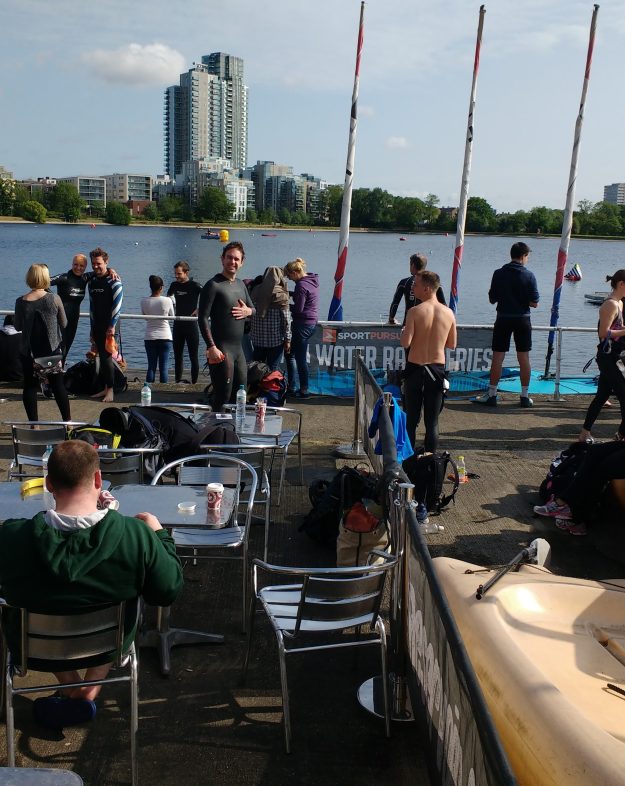 The heats are well spaced out and not too busy (at least where I end up swimming) but I still got a few knocks and taps while people passed me, which was actually encouraging as it meant I was at least swimming on the race line! Halfway around the second lap I started to get tired and knew I should probably have trained a bit more for this one, but still finished in a good-for-me time of 41 minutes. WITH NO PANIC BREAKS!

We hung around on the sunny patio for a few rounds of tea and to watch Alex off on his later 750m race. Seems the word is out and all the fast swimmers came out so he didn’t win this year, but we still got some extra snickers bars , therefore winners all around.

With all the cowbell ringing and swimming my arms are in pain writing this blog post, but am already looking forward to some more laps tonight at the Serpentine track session I help coach tonight.