Never start a blog post with a cliché. Unless you are writing about running the Rome Marathon. Then, All roads lead to Rome is 100% appropriate and pretty much mandatory.

A few months ago I caught my husband on the couch doing something he shouldn’t be doing, signing up for another marathon! We had just finished our respective fall races, the Berlin marathon for him and Downslink Ultra for me, and were covered in recovery carb crumbs and probably digging out the last of a Ben & Jerry’s ice cream tub. I looked over and he was putting in his estimated time and clicked confirm.

Obviously I gave it a few weeks and then signed up myself too.

Rome Marathon has rolling deadlines for entry and I think our registration was €50, we booked our flights early and got BA Eurotraveller tickets for £49 each way and booked an airbnb for €60 night.

Boring details out of the way, now the marathon. I planned out a 12ish week training plan for this marathon with the goal to finish and have fun. I then sat out the first 3 weeks with some persistent shin and calf pain. Training got better as time went by and I hit my peak weeks in pretty good shape so felt good going into Rome. 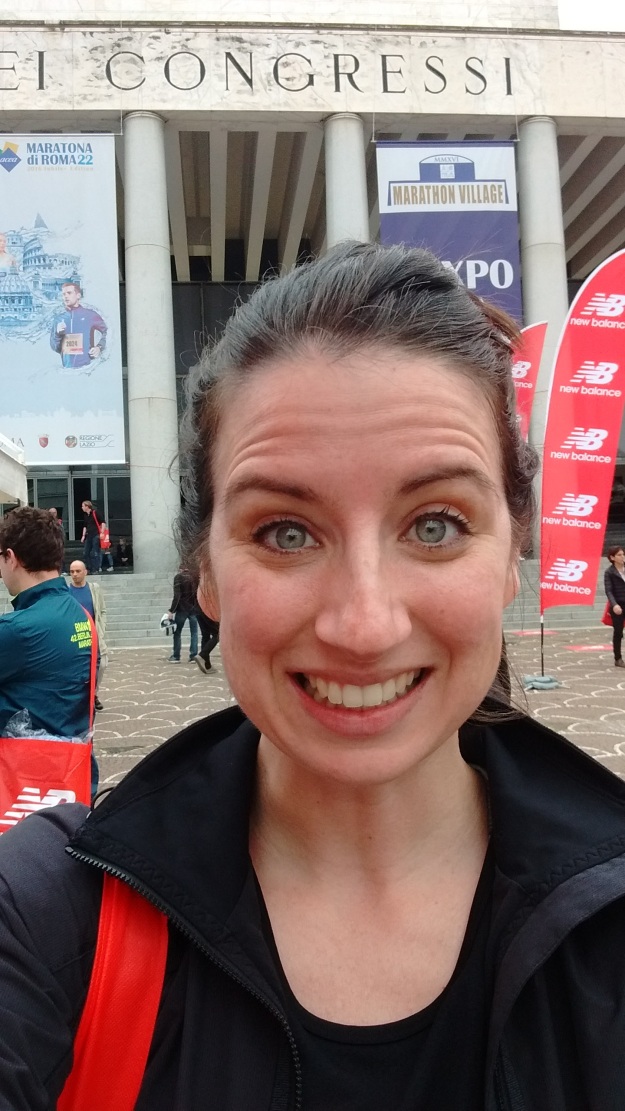 Arriving in Rome on Friday morning we went to the expo on Friday afternoon. This was a great idea as it was busy but not too busy, and on Saturday the line-up was a good hour just to get in the expo! If you like marathon expos this was a great one. I love them so we ended up getting all our race admin done and then going back to the start of the expo to “properly” look at each booth (and buy a marathon mug souvenir!). 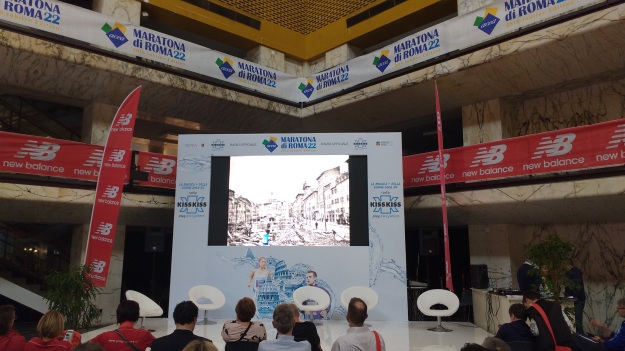 At the expo you get your number and kit. Everyone gets a very nice New Balance fitted tech shirt (men’s & women’s fit available) and a backpack you have to use for bag check, but is also a nice backpack! I’m not saying we chose to run Rome based on a backpack, but…. 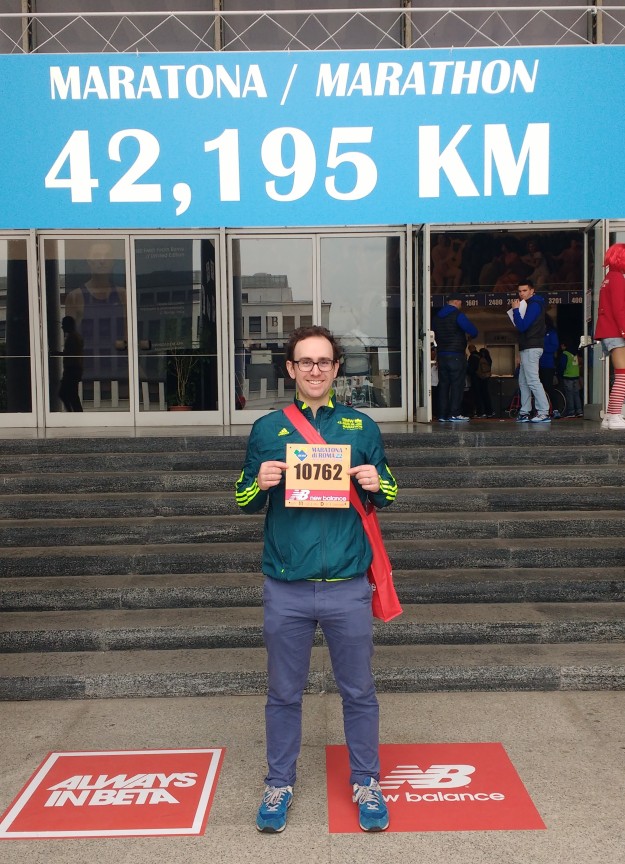 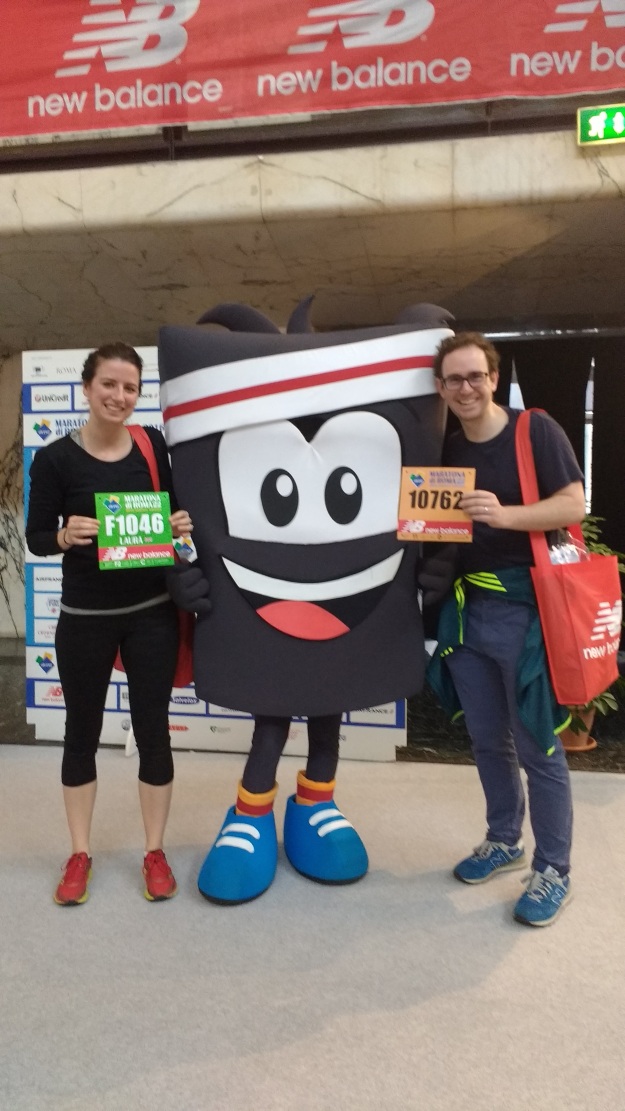 We met the mascot, Pietro (translates to paving stone, which is a very appropriate mascot for a marathon) and watched a video about the extensive history of the route. After the expo we went straight to Pizzaria il Podista, made famous in the movie Spirit of the Marathon II as the runner’s restaurant owned by runner himself Mimmo.  The place is covered in Italian running memorabilia and Mimmo himself is there everyday happy to have a conversation about running.  The food is also great, it’s super popular with locals so you have to go early to get in. It’s also dirt cheap. The house wine is in fact so cheap that we might have had a bit too much for a marathon weekend. Actually, it was probably the home made lemoncello shots at the end of the meal that caused the groggy start to the next morning. 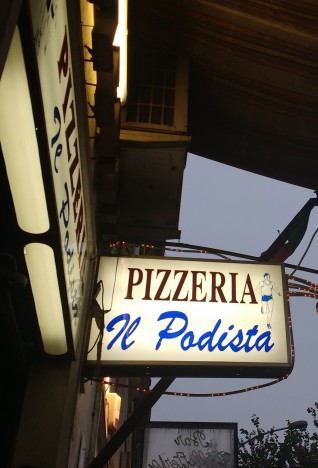 We did bit of sightseeing on Saturday but mostly just sitting around in the sun before an early dinner with one of Alex’s friends and his family and gelato to round off the night.

Early to bed and then I had one of the best sleeps of my life, let alone during the night before a marathon. I can highly recommend this airbnb for future runners!

We were quite relaxed in the morning knowing Italian time would give us a bit of flexibility at the start, so made our way on the metro with the thousands of other runners to Circus Maximo and the start area. 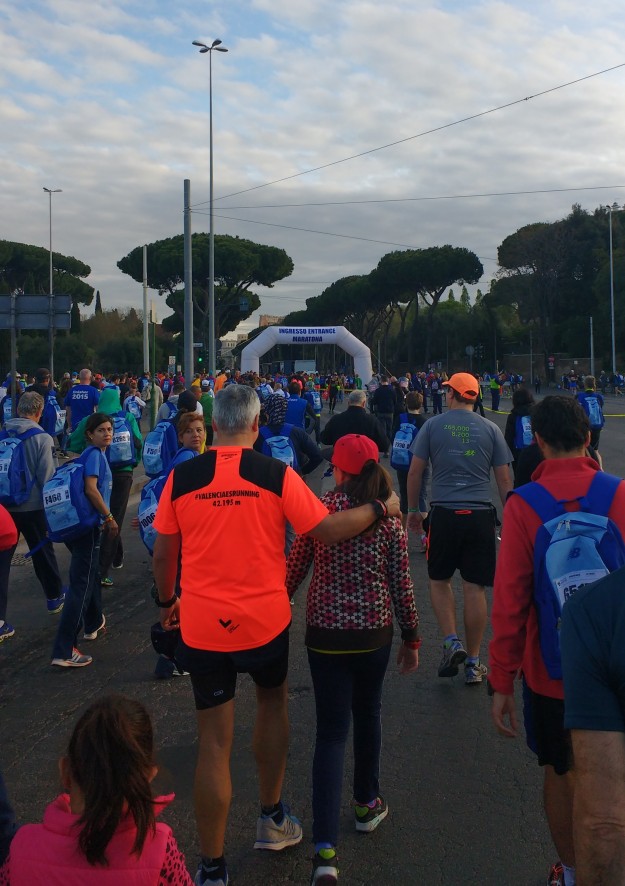 Baggage drop was just like the London Marathon, into big trucks with very helpful staff putting your bags away for safe storage. And then we wandered around the Colosseum and into the last pen where there were loads of clean and stocked portaloos and some room to breathe before the start. I think we started in the last of the 3 waves but there were still loads of people around us and we crossed the start line just before 9am. 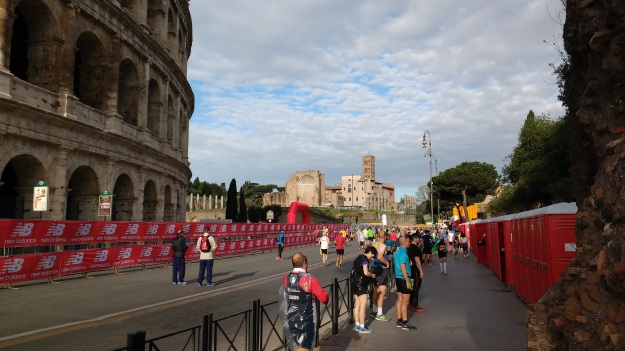 The first few miles of the course were lovely, save for the hundreds of men who assumed the course was their own personal portaloo, and a few nice British runners said hello to me in my Serpie vest and mentioned the heat (so very British) of the day. The course was lovely and the heat was taking a bit of getting used too, the water stations were every 5k and sponge stations half way between each water station. It was a perfect distance actually as you always had something to look forward too. I took my margarita shot blocks that have extra sodium in them too to keep my energy up. 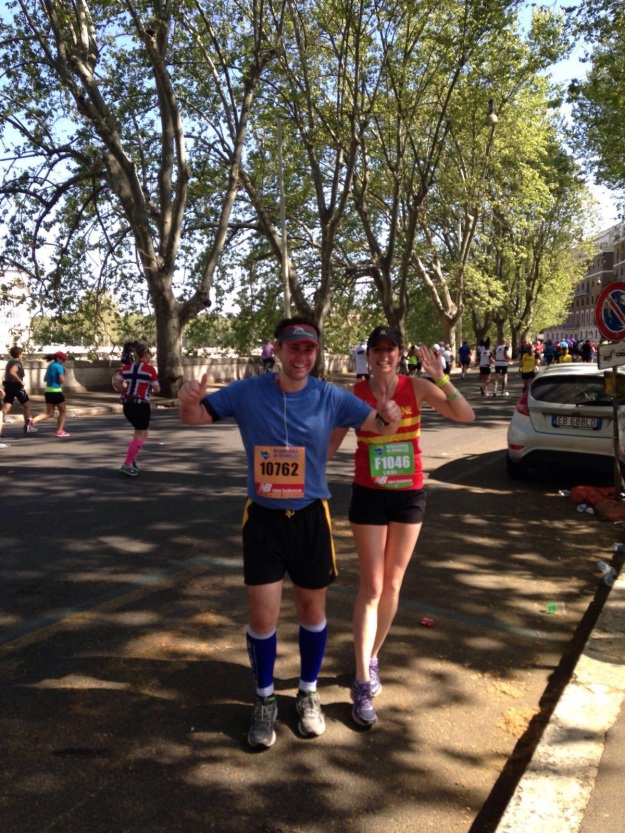 There was lots of shade on the course and a nice breeze so it was almost perfect running conditions (I love the sun, can’t lie) There was something to look at every second of the race so I’m not going to go through all the spectacular sights we passed but trust me, I was constantly looking up.

Before the race I was warned of a tough cobblestone course, but it was fine. The stones were quite worn down and it wasn’t the whole course, to be honest I didn’t even notice the uneven pavement at all. 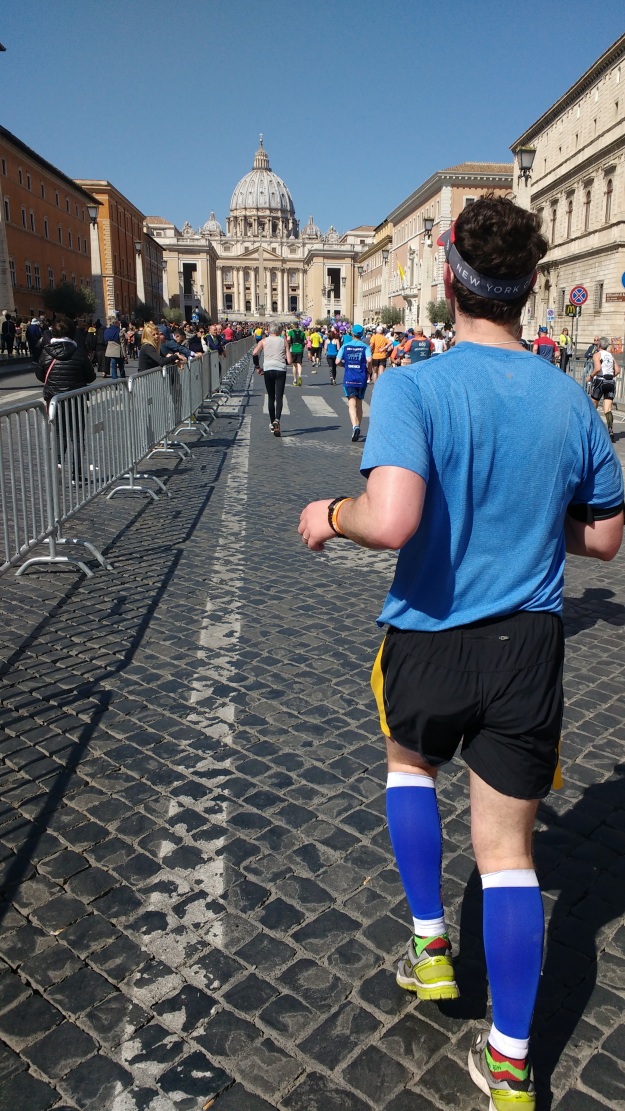 Just before half way we ran past the Vatican which was pretty spectacular. The Pope had already finished the race and been given his medal, so I think he had his legs up the wall while we ran by, but we took a few selfies regardless. 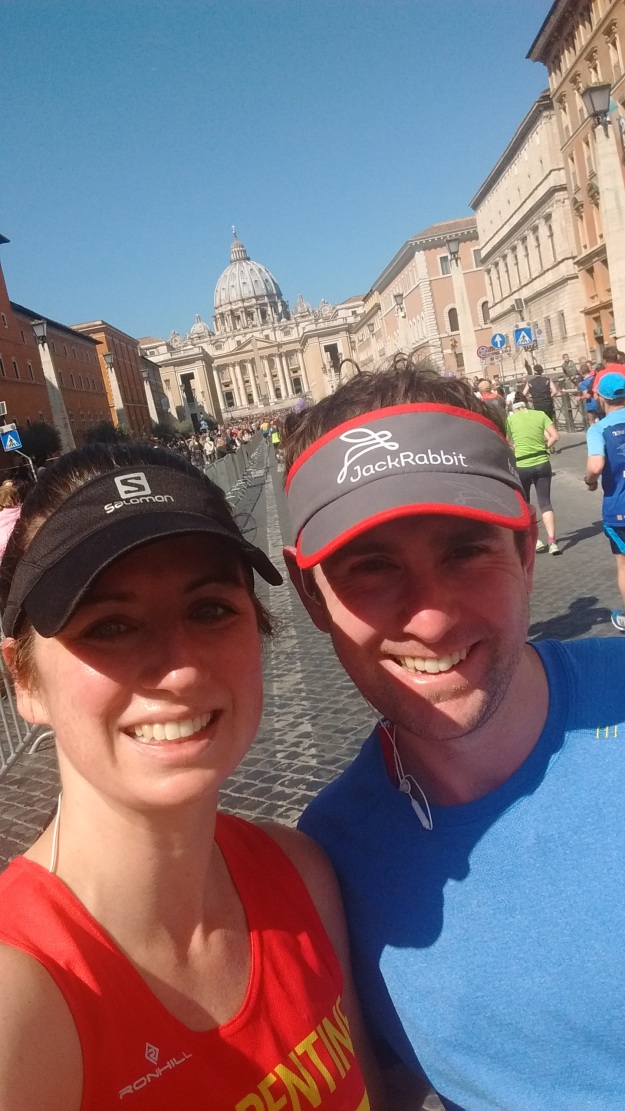 Alex told me later that he almost turned to god at this point. He wasn’t having a great race and took a moment to ask the higher powers that they help him at least finish the race.  On Monday (after finishing the race) as thanks for his help, he bought a €1 Pope Francis 2017 calendar. After the halfway point the route is less inspiring and more of a slog. The route takes you up the river and you can see other runners running back on the other bank, but not quite sure when you will cross over, it seemed like forever. 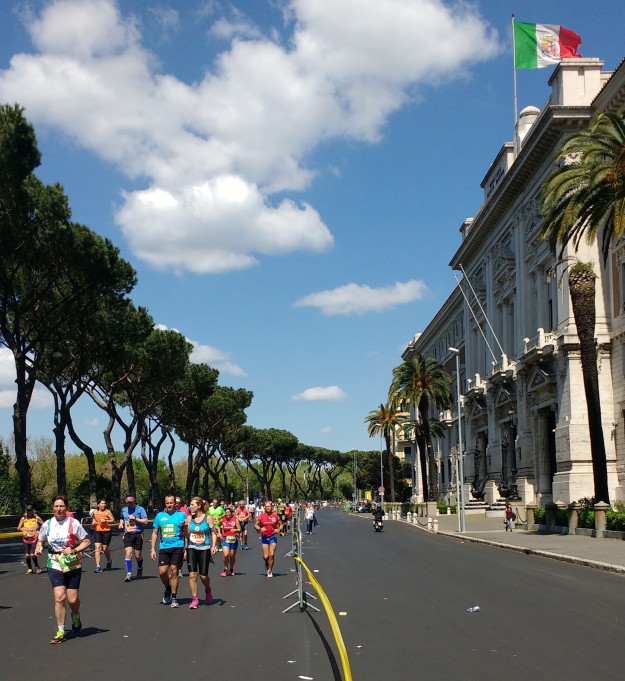 When you do cross the river you keep going the “wrong way” until you circle a big park and go up a big hill. We were taking it very easy at this point as there wasn’t much shade and we just wanted to finish so just focused on at least moving forward. 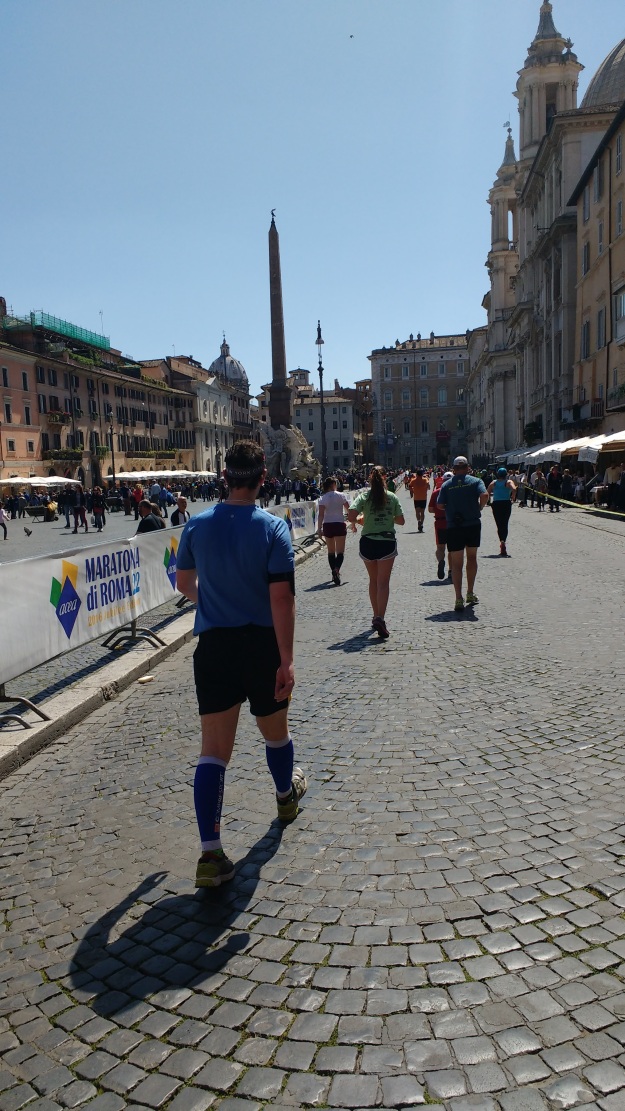 Back into the main part of Rome for the last 10k brought some life back into our legs as everyone was out cheering the course and each turn was a new Piazza to see. Walking and running this part was great as we got to see so much and take in a lot of the magic of Rome and the marathon route. After walking up the last big hill in the last mile we ran down to the spectacular finish with Gladiators lining the last 20m and ran through the finish line with big smiles. OK, I was smiling but as the videos prove, it looks more like Alex was trying to smile! 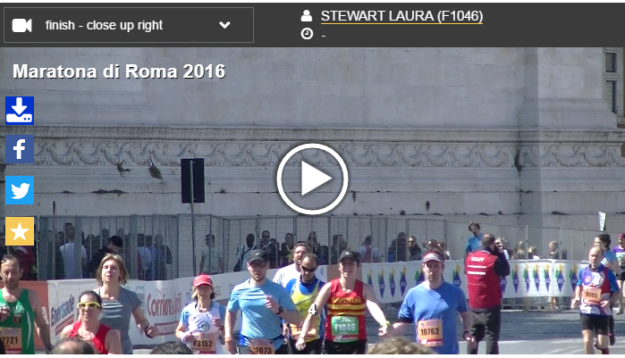 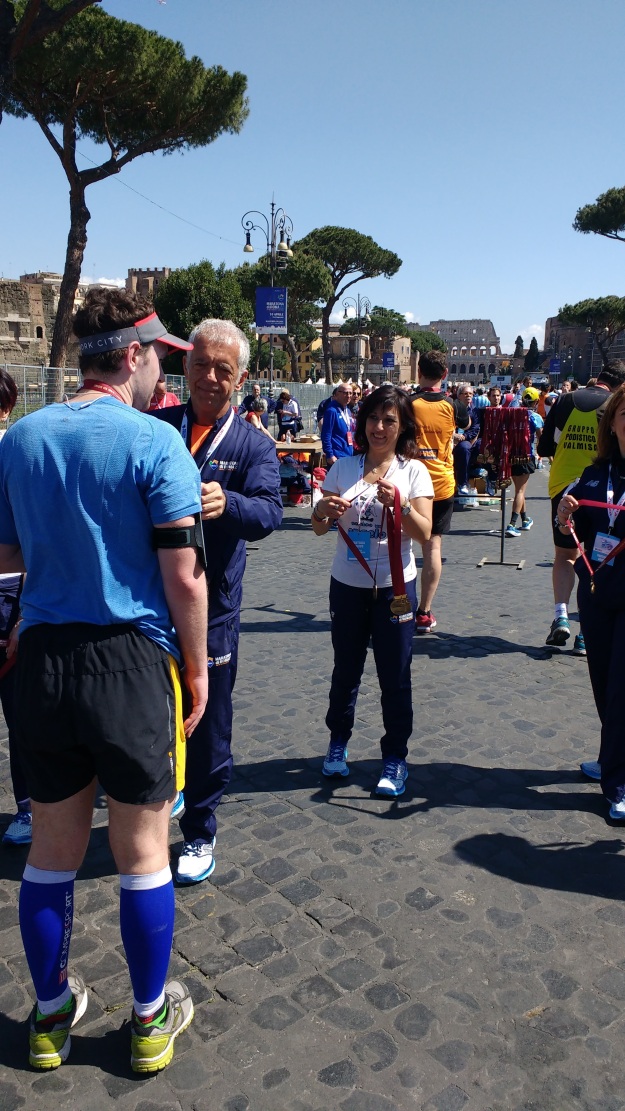 Medals and foil blankets (on a 20*C day) were given out right at the finish and then we got a New Balance bag filled with water, Energade, Biscuits, bananas, etc. on our way to the baggage trucks waiting near the Colosseum. Bags secured, we headed over to the grass ruins outside the Collesseum for some legs up the wall and rest. Is there anything better than your first lie down after running a marathon? It can literally be in the middle of a road and it feels like heaven. 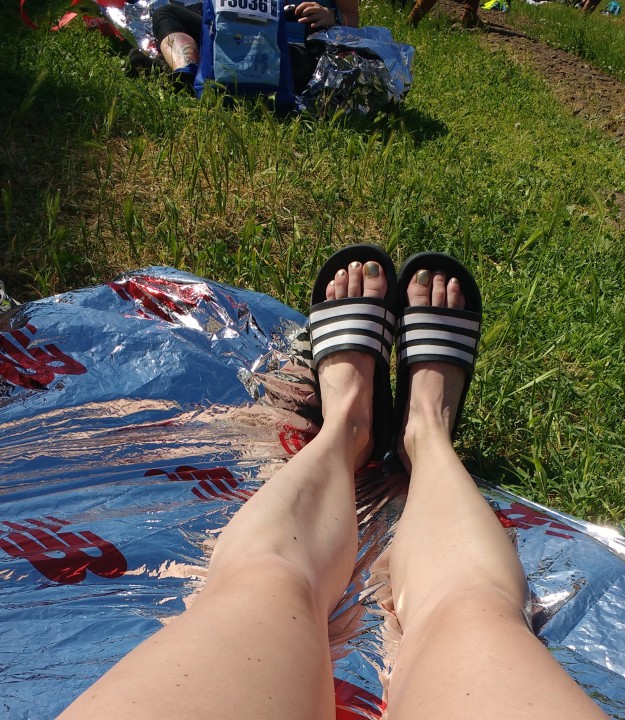 Our little slice of heaven though didn’t have beer and the touts around were only selling water so we made our way up and around to a bar patio overlooking the finish line for much needed beers, pizzas and chips.

A few stairs later we found an open metro station and made our way back to the flat to change and although we had all the intentions in the world to go to the official afterparty, a deliveroo of burgers and milkshakes won out in the end.

The next morning we made our way down to the Trevi Fountain to enjoy a gelato breakfast and more sunshine before flying home later that afternoon to London.