I ran another cross country race today. This one was the 83rd Sorority & Fraternity Cup.  It’s a 5(ish) mile race in Trent Park and unique in the cross country calendar as all senior men and women run together.  Most cross country races are separate for men and women as they run different distances.  It’s no secret I’m all about equality, and the fact that women run a lesser distance than men in most races should send me off on a rant, but it’s not something that bothers me as much as other issues in running.

There is a big debate going on in North America about distance equality in collegiate cross country races, and the problem with men and women both running 10k is that 10k isn’t an ideal distance for runners of that age, and runners who are mainly running track & field distances in non-xc seasons.  (Big difference between 3000m and a 10k). Plus 10k is an arbitrary distance for men, so why should women “move up” to it rather than run a different but equal distance?

Anyway, debate away, but this blog is moving on to something else. What is in my spike bag? Cross country is the simplests of sports. Vest, shorts, spikes and go. So what do I bring in my spike bag to every race? 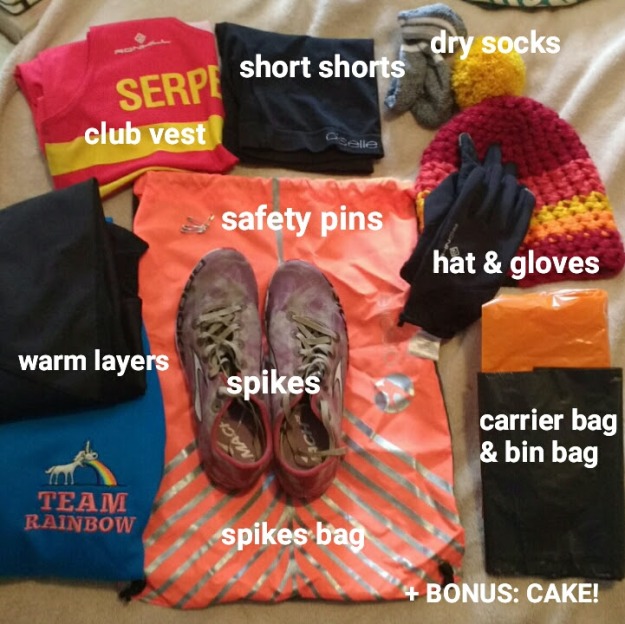 1. Pack your spikes! Bring low profile racing socks too if you wear them with your spikes (some people do, some don’t)

2. Club vest. For most cross country events you have to race in your club colours. This is mainly because these events are organised and managed by volunteers and put on for running clubs.  At a race almost everyone pitches in with some helping hand from set up, to handing out numbers, recording finishers, it’s a great show of the volunteering spirit of running clubs.

3. Short shorts. It’s easier to wash mud off skin than fabric. If that’s not enough convincing, then I promise you will be sweating 300m into the race, do not get suckered into wearing long layers under your vest or long leggings. 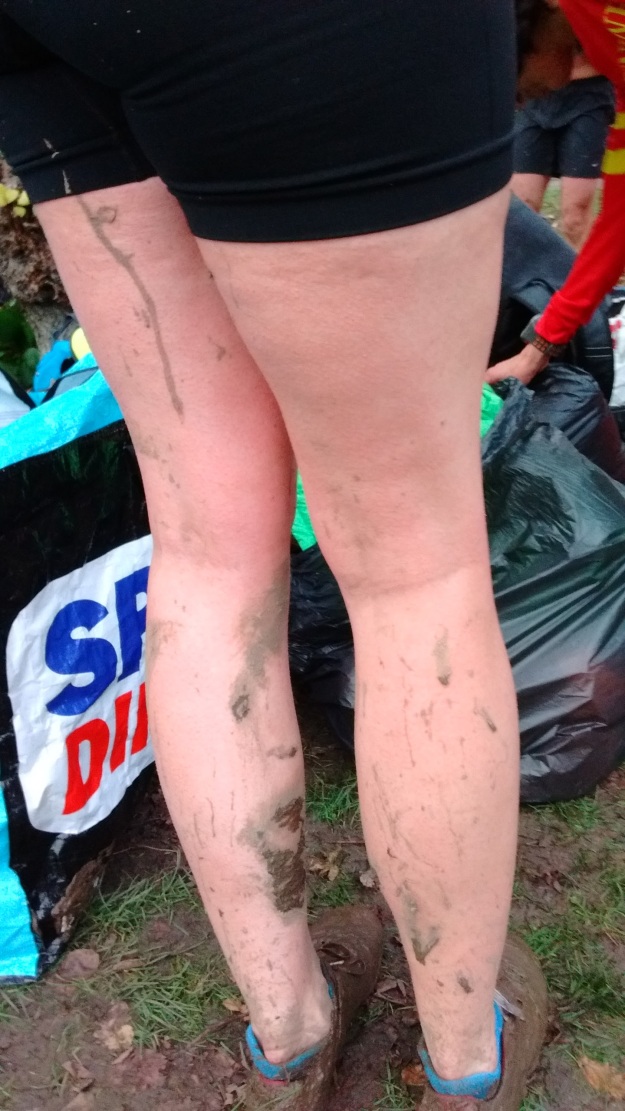 4. Dry socks. Once I forgot them and had to buy some at the Tescos on the way home. Squeltchy ice cold wet feet is not the post-race experience you want.

5. Hat & gloves. Hat for before/after, gloves for during the race if it’s especially if there is a bitter wind. I’ve worn them the past two races because  I was having a hard time keeping my fingers warm in the cold wind. Plus, vest + gloves = absolute pro style. Take Sonia & Paula’s word for it.

6. Bags! I pack a carrier bag to put my muddy spikes and socks into after, and a bin bag to put my bag and jacket in while the race is on.  Cross Country events are in muddy fields and there’s no bag check. A bin bag keeps everything dry and together while you’re out running and acts as a dry place to stand when you’re getting changed in/out of your spikes. 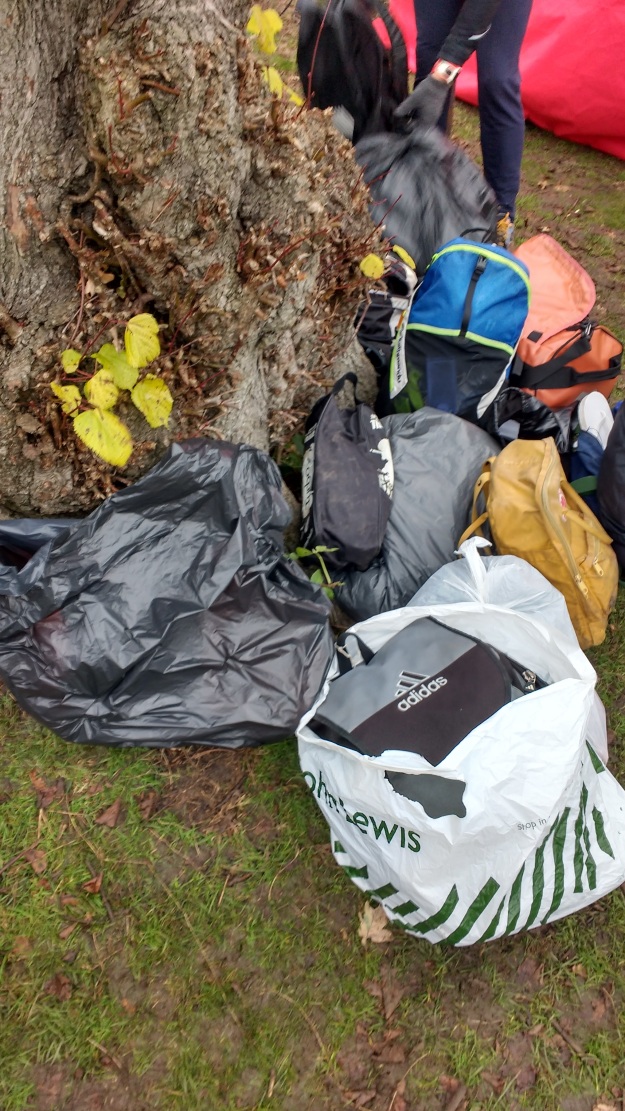 7. Safety pins. Someone from your club might remember to bring some, but best to bring your own so you’re not stuck running the race holding your number.

8. Warm layers. Wear them there, wear them home. I have been loving my appropriately named xc merino leggings made by Bowndling. Unfortunately, not available anymore, but they’re cozy merino and waterproof thighs. Perfect for cozyness and wind protection.

9. (not shown because I forgot them today and was mad!) Wipes. Bring a pack of face wipes for your face, legs, arms, and everything else that gets mud on it. 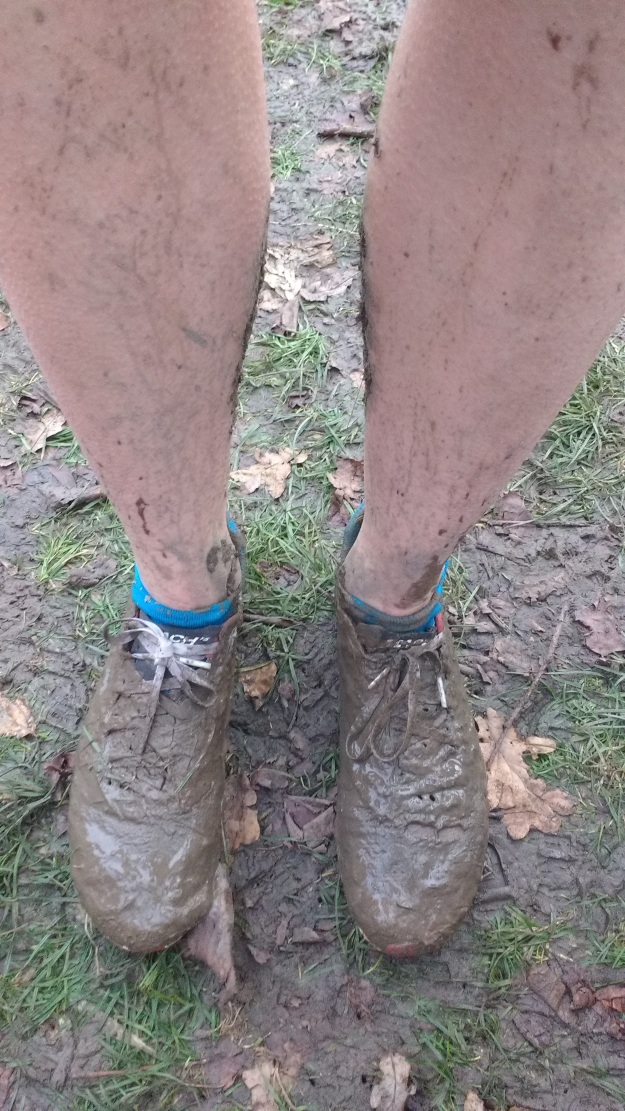 10. Cake! Bring cake to a cross country race and you will be the most popular person in your club after the race.

So, get your spike bag out let’s run around in the mud.