I always thought there was something that ultra runners knew that I didn’t. Something special that allowed them to run for many hours and then at the finish line they took an oath not to share the secret. It’s not that ultra runners aren’t friendly and oversharing. I’ve heard every story imaginable from my friends who have run an ultra distance event. From the glorious scenes to the mundane boring plodding. From chafe spots to wardrobe malfunctions, but I always thought there was something more. 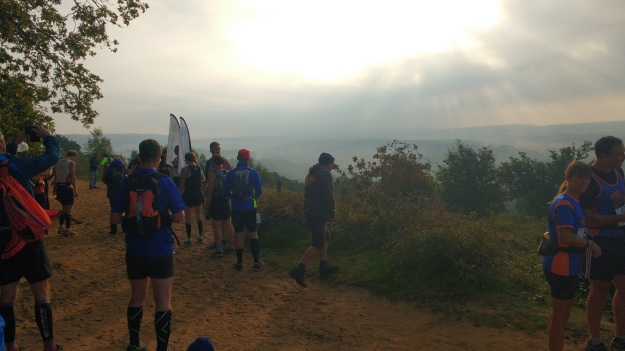 Nope. It’s just being able to keep running when you don’t really want to any more. Being able to mentally focus (or zone out) when you’ve already ran many miles and have many more to go. And there is no trick to this. You just have to like running and really want to achieve the goal you set out to do. All the training is great, but you still have to go and do it. Run. Support helps a lot. I have had the best group of friends to inspire me and help me along with my training, not to mention keep me laughing during the day. I think everyone wants to believe there is a trick, but on Sunday I learned there isn’t any more to it than just going out and doing it. 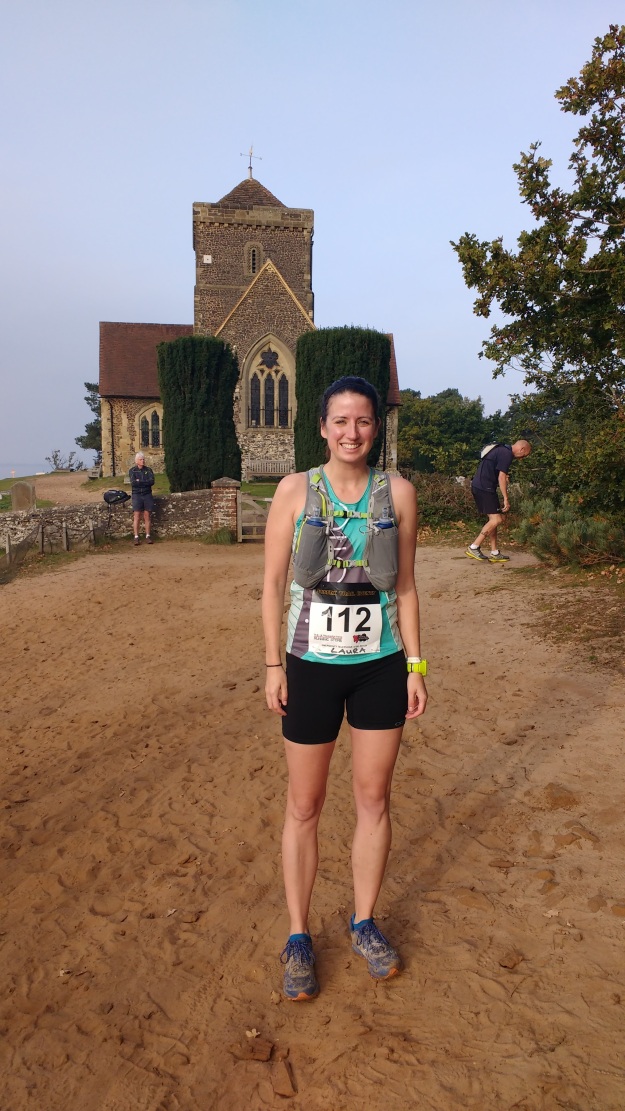 The journey to my first ultra marathon started because of Chris McDougall. Like many people I had read Born to Run in 2011 and then… didn’t do anything. I kept running a bit, doing a few half marathons, and generally enjoying life.  Roll on to 2015 and I saw that Chris was coming to London to do a talk at my favourite running store I quickly requested tickets and was lucky to get a couple for Alex and I. When we got to the talk we sat down and saw a former colleague of Alex’s and got to chatting about, obviously, running. He lives out near Guildford and said there was a great company putting on low key and well organised trail marathon and ultra events like the Downslink if we were thinking of stepping up from the marathon distance. Chris didn’t end up even speaking that night as he had laryngitis, but because of him I ended up with big 38 mile race on my calendar for October 4th. 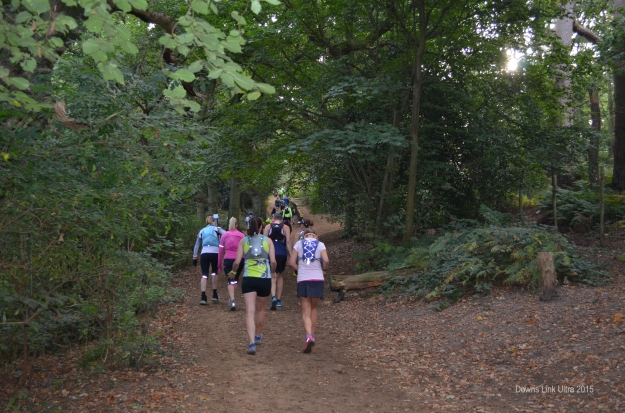 After 16 weeks of training, put together by my friend and coach Laura, I found myself walking up one of the biggest hills in Surrey at 8:45am on a Sunday.  The Downslink Ultra starts on the top of the glorious St. Martha’s hill on the North Downs Way and (obviously) runs south to link up with the South Downs Way. It’s an old railway taken out of service in 1960, and now a very popular path for walking, cycling, and running. The route is very flat and some say boring, but if you have the energy to look up there are some great views and interesting bits along the way. 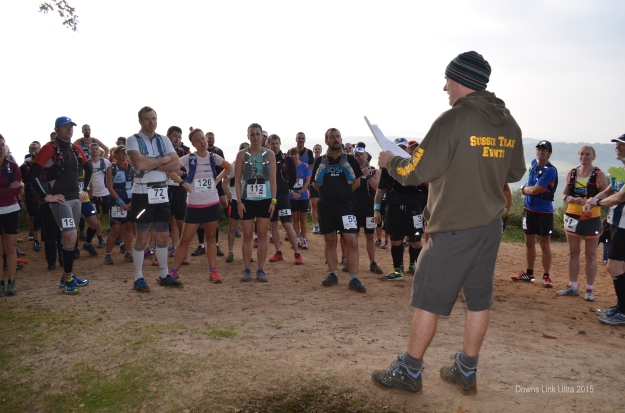 Rhiannon and I started and were chatting with a friend and his family when all of the sudden the start horn went off. I’ve had parkruns with more pomp and circumstance, but it was all fine as about 100 of us went off tumbling down St. Martha’s Hill.  There was a horse and rider who ignored the request to wait a few minutes on the narrow path, but we all seemed to pass him with minimal annoyance to the horse.  I started out running with Rhiannon and one of Alex’s friends Matt but it wasn’t long before Rhiannon’s ultra-seasoned legs took off ahead of us. The first few miles were along roads and paths until at about 3 miles we arrived on the Downs Link proper.  From there it was 5 miles to the first aid station and all I remember was that I was running a bit too fast but also having a nice chat with Matt about his recent home cider brewing experiments.  I had to take a few forest comfort breaks which wasn’t ideal but figured better to get it out than carry it all another 30+ miles.

We didn’t stay long at the first aid station. I grabbed a few pieces of watermelon and then kept going. Around 12 miles things started to hurt. By things I mean everythings. My left hamstring and butt felt like rocks instead of muscles, and then my obviously overworking left hip started to complain, toes and feet made themselves known on the pebbly path, and just in general things were not feeling easy.  I just kept looking forward to the aid station at 15 miles to have a little stretch out if nothing else. 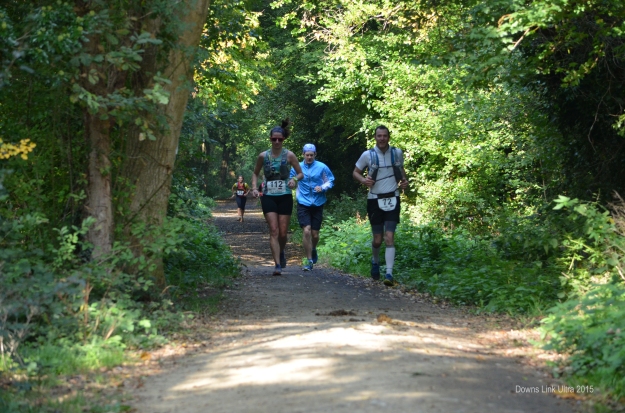 Matt had decided to run with me, even though he could have easily finished a few hours ahead, and it was nice to have the company even while plugged into headphones plodding away. He had run last year too so knew the route well and was very helpful with opening the stiles along the way. We hung around the 15 mile aid station a bit, and checked in with my friends to update them on my progress and send a few I’m doing an ultra selfies. The pigeon pose and hamstring stretches seemed to work and  I ran out of the aid station feeling OK (which during an ultra I’ve come to realise means AMAZING IRL)

I don’t remember too much until mile 26. I had been trying to follow a run 2 miles – walk 1/2 mile pattern and while nothing was specifically hurting any more, the monotony of running was getting to me. This was when I just wanted to stop for the sake of stopping. Everything to do with running was annoying me in it’s own little way and it really would have been an easy choice to stop. But, at mile 26 we ran past a brewery. Nothing cheers me up like a beer and even though we didn’t stop it was like a mental pint for me to keep going. At this point we also passed the 26.2 distance which means I was officially running an ultra. Weirdly I never really thought of counting down the miles until that point. I knew it wouldn’t help to think about half way, or x # of miles to go, so I just let the miles tick over. 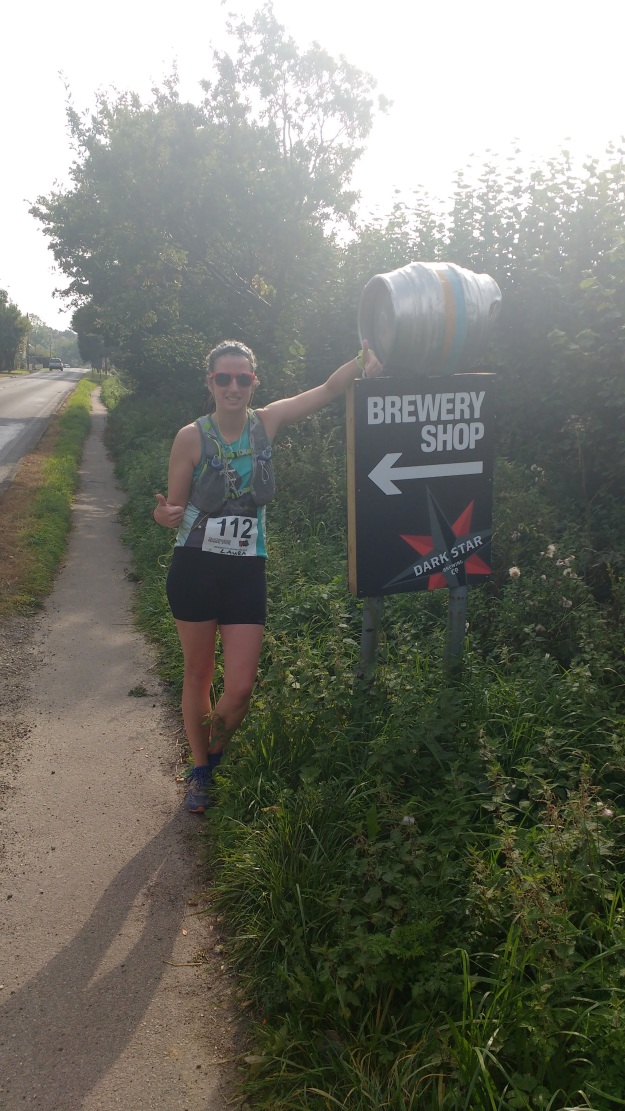 The next aid station was an oasis of happiness on the course. Put out by the Burgess Hill Running Club it had everything. I grabbed my glass of flat coca cola, and then picked at the sausage rolls, pineapples and cheese, and of course watermelon. Then, the best part came ROAST POTATOES fresh made! They were so perfectly salted and just the best. I wanted to stay forever. 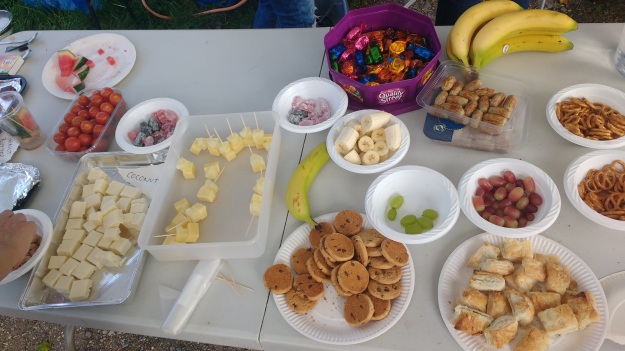 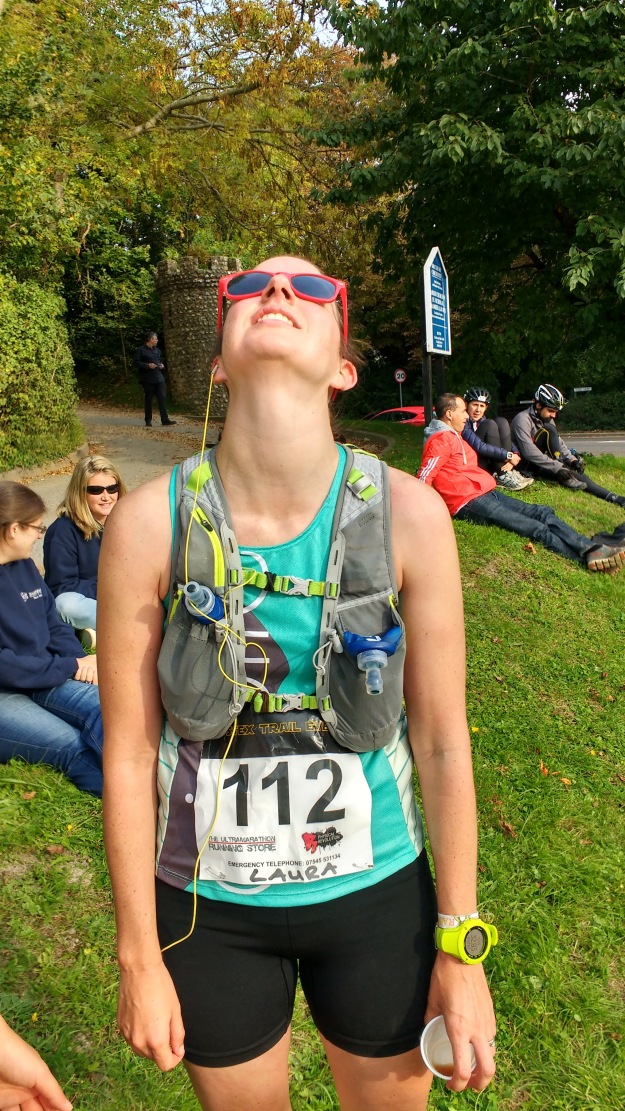 As we left we ran into Alex who had come out to cheer us on. He was originally signed up to run the race, but smartly decided to sit it out while still recovering from Berlin. He had cycled out from the finish line, but had a slight bike mishap when the derailleur snapped off 10 miles in. Not ideal but he still met us and ran most of 4 miles with the bike at our (not) blazing pace. I’m really proud to say that I helped him patch up the bike to make it moveable in the middle of the ultra with my extra hair elastic. Be prepared for anything during an ultra! 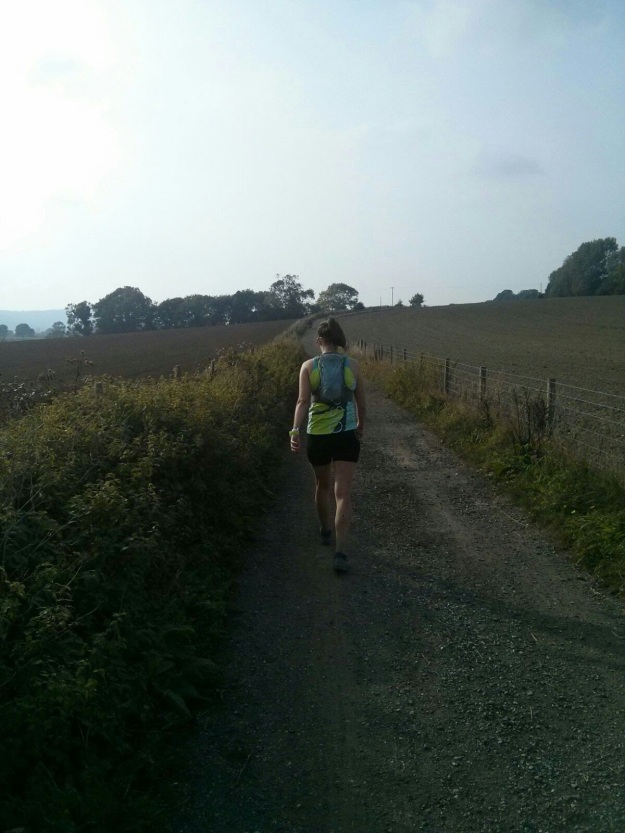 The route became a bit hillier than the previous 31 miles but as we ran into the final aid station at mile 32 there was Cathy with her most amazing cheer sign. A big hug with her and another glass of coca cola I was renewed with energy for the final 6 miles. 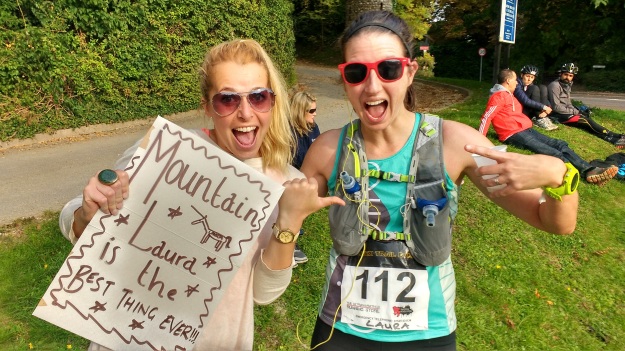 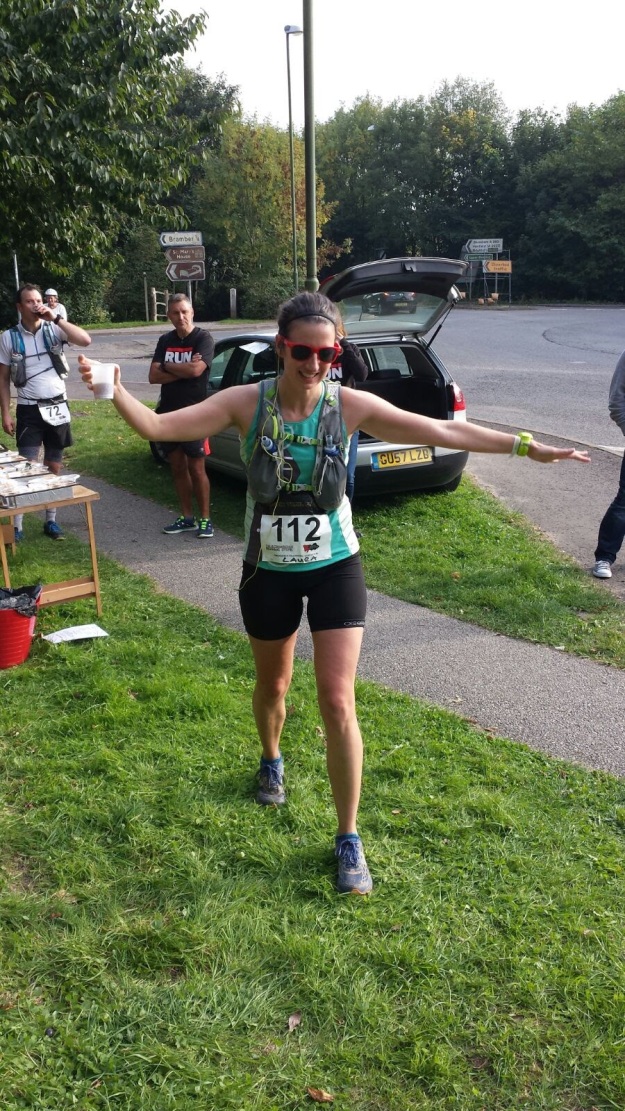 It almost felt like a new day of running to be honest. Things still hurt but not as much as before, I think my body had accepted we were in it for the long haul now and to just get on board for the ride. 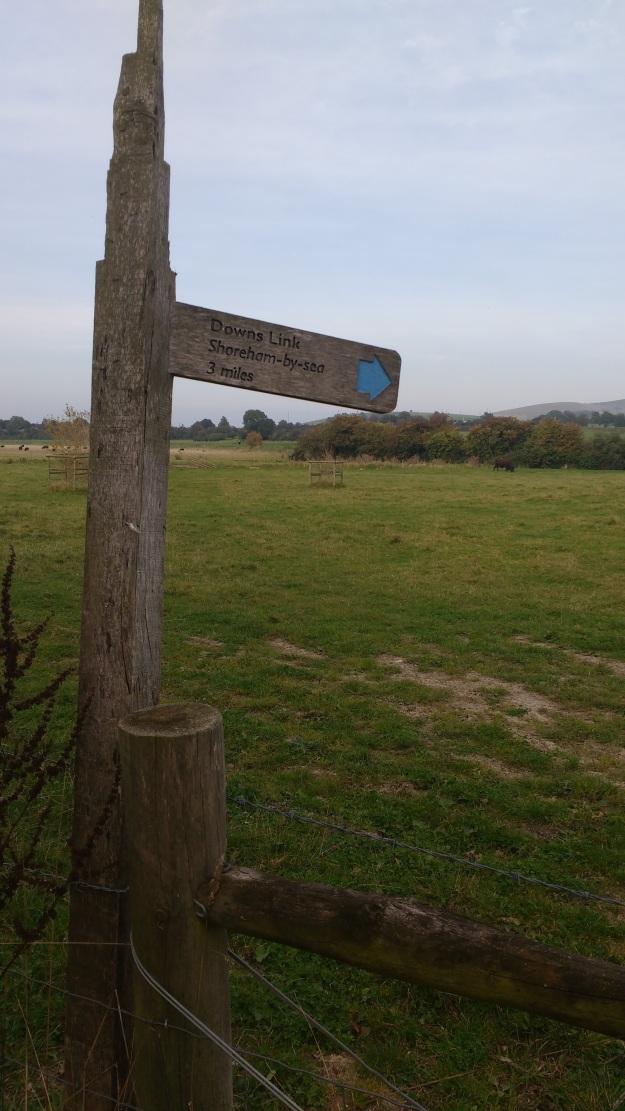 There was a lot of running in the last 6 miles. I know this sounds silly in a running race, but I had walked on and off quite a bit in the middle miles and found it hard to put more than 2 miles of running together, suddenly at the end the rhythm of running was easier and I didn’t feel the need to walk as much. Once we got to the first Shoreham 3 miles sign I knew we were going to run the rest with no breaks. By the second Shoreham 3 miles sign, I was beginning to question the accuracy of these signs. The third one made me double check my eyes were still working and go back to my watch distance. 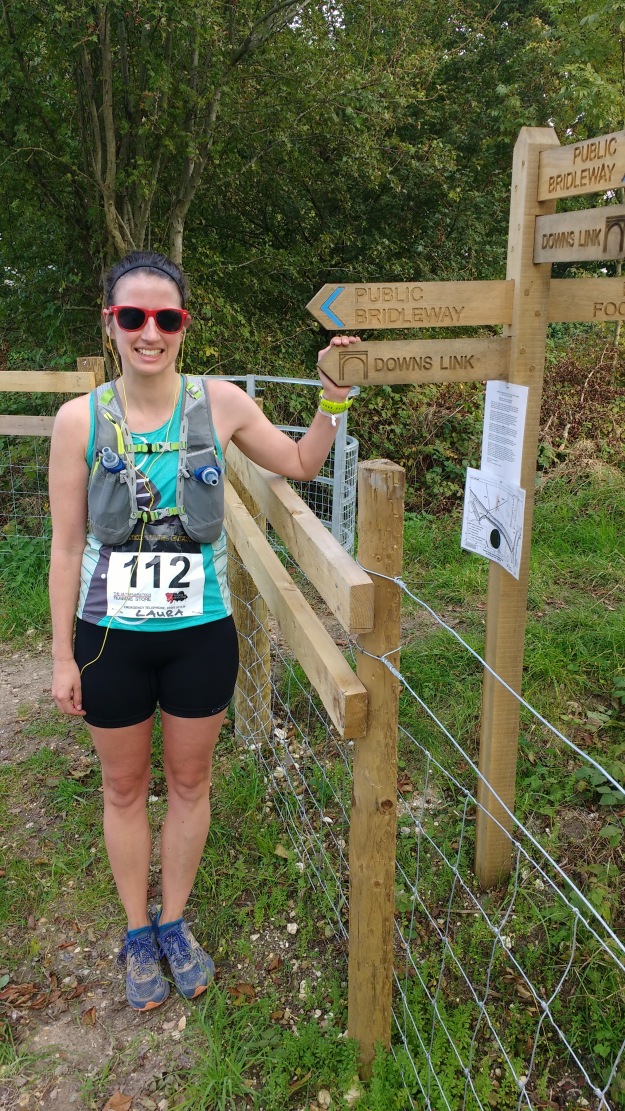 I always run the last 2 miles of a marathon for one of my best friends and don’t give up because she doesn’t give up ever. The Downslink Ultra did its best to make me stop running near the end with the wobbly pavement stones of death along the river that would have been hard to run on during a good day, but after 37 miles you just had to trust your foot would land evenly. Alex ran with me for this bit which was nice but I had to tell him that I loved him being there but couldn’t do anything but run at that point. No talking, no smiling. Just run. 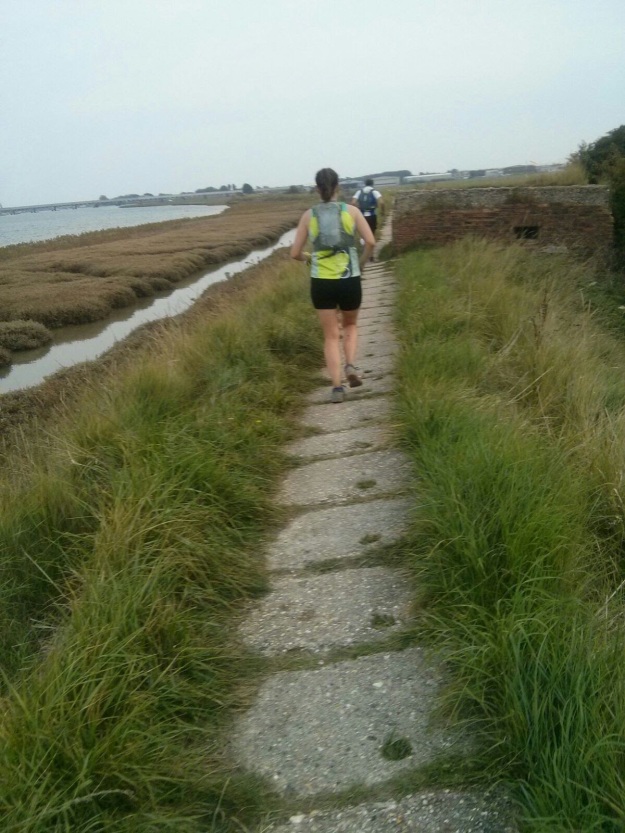 Finally on the lovely soft grass of the Shoreham-by-Sea Scout Hut lawn we turned to the finish line where there were still lots of people cheering us in. They congratulated us each by name and we were medaled and t-shirted (still lots of sizes left even when we finished) and left to soak it all in. I finished in 7:55 (under my goal time of 8-8:30!) and 91st out of the 104 who completed the race. (Actually there were 105 who completed the race) 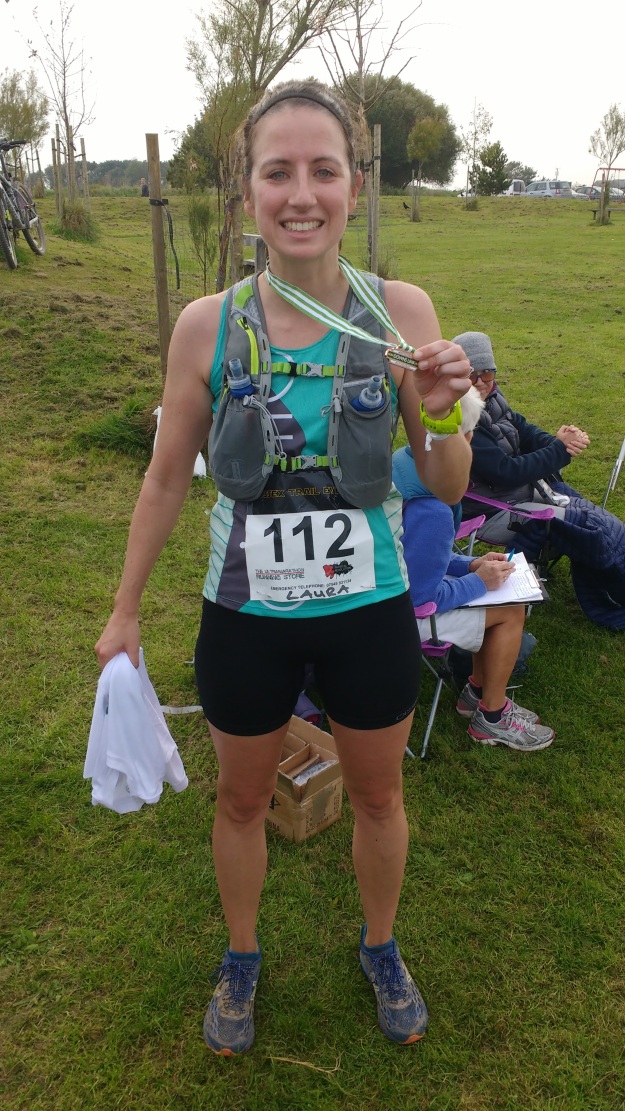 After a few wobbly photos I hobbled up the stairs to race HQ where we got to sit (!!!) and get some warm clothing on. The race organisers make world famous vegetarian chilli and pita which was perfect after a long day eating little bits of this and that. Having the greatest supporters ever, they drove Alex and I back to the train station to get back to London. 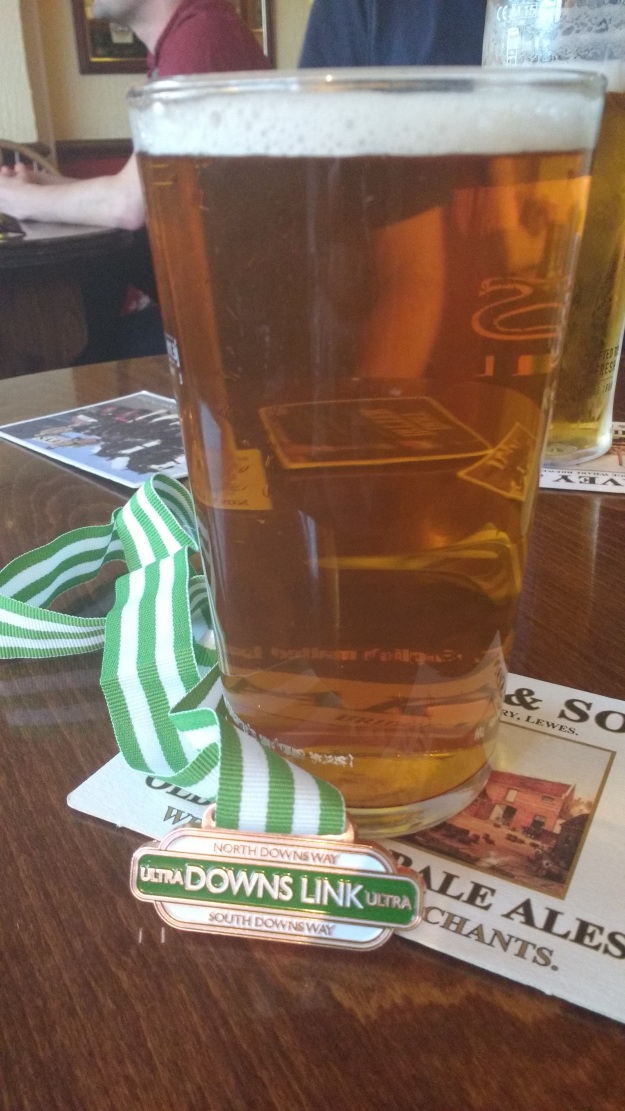 We nipped into the pub before the train where I finally got to enjoy a pint from the Darkstar brewery we passed on the route. On the way home I snacked on the amazing race goodybag provided to me by superstar Cathy. People know I like snacks. 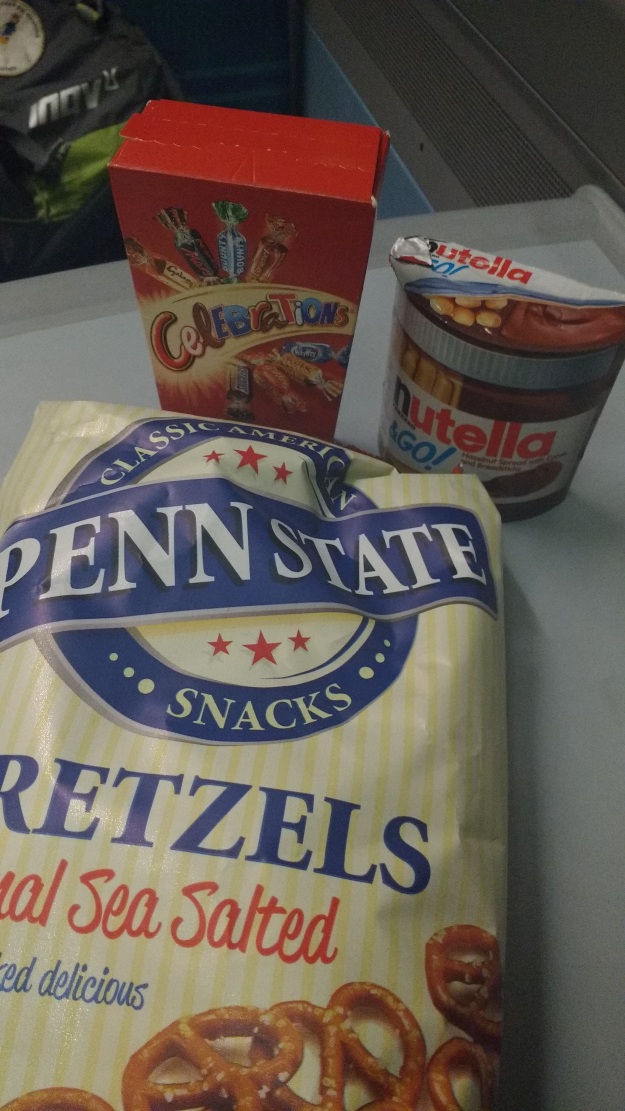 I have nothing but good things to say about Sussex Endurance Events and the Downslink Ultra. It was everything I expected and more. It’s a very flat route. For some that sounds good, for others, bad. I would have liked a few more hills to be honest, but there is lots of time for more events in the mountains. As someone who was nearer the back than the front all the aid stations were still fully stocked and every marshal was still as perky as when the winners came through over 3 hours before me. It meant a lot to me, especially in my first ultra, to have such a supportive experience. I know it’s not easy to put on an event like this but give full marks to all involved. 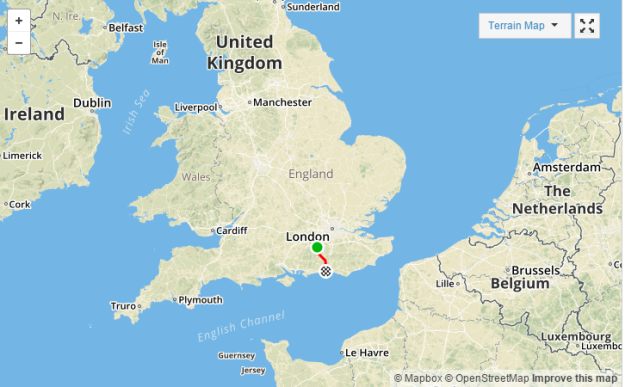 Another runner made a great video of his run. I watched it in my Epsom salt bath last night and even though everything ached, I still sorta wished I was back out there 🙂

Note: These Oiselle flyte shorts are the best things ever. Super comfortable, perfect length (my thighs eat short shorts) and no chafing for the whole time. Also very black and no chance of see-through bits! I wasn’t sponsored by them or anything to say this, I just know how hard it is to find comfortable shorts for long runs!