My thought process for signing up for the Classic 55 London Duathlon went like this:

When I went to watch my husband do the London Triathlon Sprint, save for the swimming part, it looked pretty fun, flat and easy (from my dry seat in the expo drinking free vitacoco). So far this Duathlon thing was shaping up to look like a lovely day out with a new medal to add to the collection.

Up until yesterday my training consisted of a hazy half marathon training plan, some track speed work I picked up from Women’s Running magazine, a 60 mile cycle to Brighton in mid-July, and the odd cycle commute to work and bootcamps 3X a week.  So when the London Duathlon offered me the chance to try out a brick session with their sponsor RG Active to kick-start my training and learn how to transition between running and cycling I said sure, why not?  Transitions are something I never had to worry about in half marathons. Start – Run – Finish.

I scanned over the booking email that said we’d practice transitions by doing a 5k ride and 1.5k run and we shouldn’t try anything crazy just the basics.  There was a bit about elites being there practising too and that we could watch them do all the crazy flying starts and such if we wanted.  So, I arrived in Richmond park ready to practice although my legs were already well tired from the 10 mile commute there. 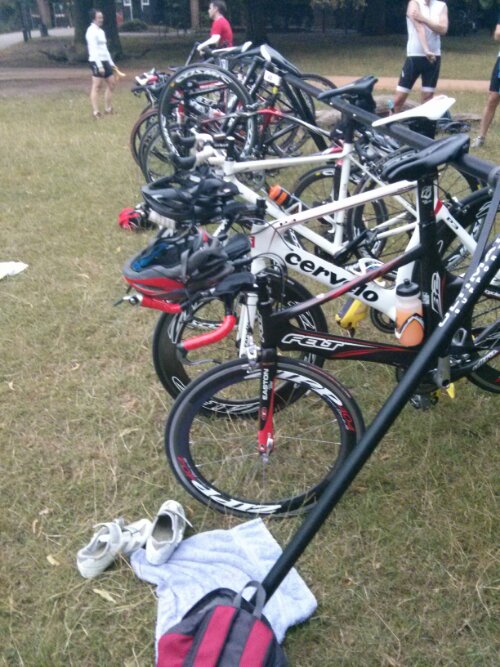 Martin and Carole were coaching the session and took some time at the start to talk me through the session and carefully explain the route (so I didn’t get lost) and give me some tips for successful bike/run & run/bike transitions.  As I nervously scanned the other participants I noticed that they were all in tri-suits, all had REALLY nice bikes, and all knew each other. It was at that moment I realized I might be a bit over my head at this session.  No time to worry though, a quick warm up run and we were off on our bikes. Well, everyone else was off but no matter how fast I pedalled I seemed to putter along the road at a pace barely faster than a snail. Until that moment I was quite confident with my speed on the bike, I passed people on the London-Brighton cycle, and according to my decent road bike and strong running legs I thought I should be a solid middle of the pack cyclist. Not today.  The rest of the group were at least advanced cyclists (if not professional) and it showed. They were so efficient on their bikes it looked effortless as they finished each 5k lap at least 2 minutes ahead of me. I quickly realized a) I have to up my cycling game, and b) I would be competing against myself in this session.  No longer was this a 10k run, 40k cycle and 5k run. It was a whole new sport that I wasn’t very good at.

It’s been a long time since I was the last at something. I know you don’t get better at something unless you go way out of your comfort zone and push yourself to the edge of your ability, but lately I haven’t done that.  So, on my bike on the first of 3 laps, with the rest of the field already out of sight I decided to focus on the positives of my last-place-out-of-my-comfort-zone-fear and push through it. I promised myself I’d finish the session, not walk up any hills on my bike, and try to stay in that big gear through the flats and not free wheel. 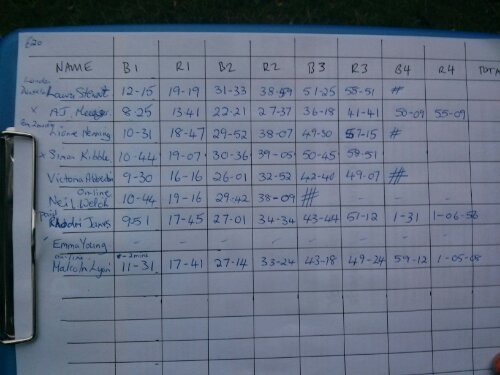 I kept focusing on the positives but was also close to frustrated tears so as I came into the transition I put a smile on my face and just hoped for the best. The coaches were really nice cheering me on and genuinely pleased with my time.  I knew I could run faster than I cycled so I focused on that and didn’t even notice my jelly-legs after the transition. I just tried to push myself to running my 5k pace around the 1.5 loop.  I ended up making up a lot of time on the run as it was clear most of the athletes were using the run as recovery from their cycle (it’s apparently a good strategy to use in these short brick training sessions as it builds cycling skill).

The second bike lap happened and I didn’t get lapped yet by the fastest guy so I counted that as a positive and went into the run with that positive thought… and my helmet still on. Brick fail #1. Not a problem though as you gotta make mistakes to learn from them, so I chucked helmet back towards my bike and re-set off.

The blur of bike/run/bike/run continued until my last bike lap and I knew I was close to getting off my bike forever (forever = 20 minutes until I had to cycle home) so I pushed up the hill near Pens Ponds and kept pedalling hard down the hills even when a peleton of matchy-cycling-club people passed me on one side and a heard of deer were on the other.

On the last lap of the run I caught up with one of the coaches who, “hadn’t done much in a while and was just getting back into shape.” and he gave me some really helpful tips over our last 800m of  running.

So, I survived my first brick session and lived through being the last (the fastest guy did lap me going up the hill on my last lap – as expected) and least experienced duathlete in a group of hardcore triathletes. I’ll even sign up for another one as I think it’s valuable training and the coaches are really supportive and helpful for a newbie like me.  I haven’t quite broken the news to my legs yet though, they’re still shaking from last night.  Best to give them a few days, more chocolate milk, and a foam roller before subjecting them to that again.

Check out RG Active’s Richmond Park brick sessions held Wednesdays & Sundays (they do swim training too!).  They’re £20 each and the London Duathlon generously gave me my first session for free.