I signed up for the Nike We Own the Night Women’s 10k way back in March.  It’s no secret that I love the free Nike Training Club classes that Nike put on, and have had a great time at the Lunar Run, Flyknit experience, Run with Ellie Goulding and the Nike/Elle UK Monday night training runs.  Of course, there have been some issues with their event organisation here and there, but no other company is consistently putting on events that are helping women get active and at the same time challenging us to push further.

Back in January I made a pledge to #makeitcount with my friends and when Leah started Team Naturally, Run to train for this race I was on board from the first day. From weekly newsletters, bespoke training classes, to an active Facebook group sharing our weekly runs it became a community of friends we could count on to work towards our own goals.  [note: friends! Not ‘internet friends’] Training with Team Naturally, Run was one of the most enjoyable experiences I’ve had when it comes to running and just shows the power of social media and connecting to build friendships.

Ok, guess I should get to the actual race report now.

Having a race in my backyard was nice as there was no stress about getting there or unknowns. A quick bus there that progressively filled up with orange shirted women, and we were at the start area in Victoria Park with loads of time to check things out.  More festival than running expo, there were tents providing manicures (the only appointment left was 43 minutes after the race started. Elite only need apply) and loads of food trucks serving up everything from meringues (?) to tea & crumpets. Even in the sea of orange it was easy to pick out friends from Nike training club and Boutique Sport and was really nice to see everyone excited to run. 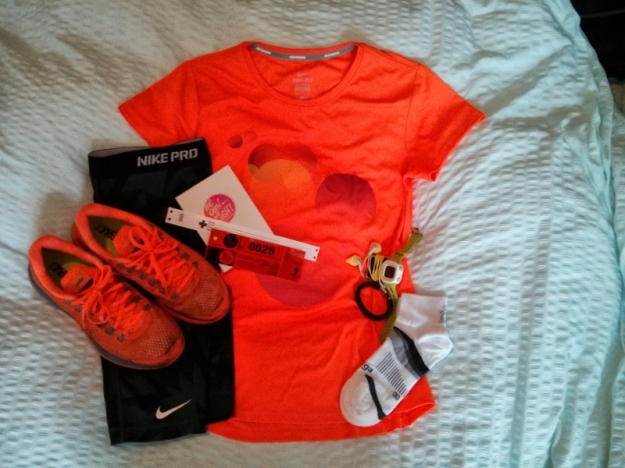 The sign-up for the race included a question if you were a:

Knowing Nike’s love for disorganized mass starts (the recent British 10k and Run to the Beat in London as examples) I signed up to lead the pack, an ambitious target but I figured it would pay off to be confident.  As we walked into the race start they were handing out glowing wristbands to determine your start corral. Even though the sign up choice was arbitrary, the handing out of wrist bands was even more so. You could just pick whatever one you wanted with no check of your registration or any proof you could actually keep up any sort of pace.  I’m not advocating for proper club style racing here, but a little more organisation from Nike could have avoided a lot of confusion and complaints later on.  My friend Nova an I were given orange because the girl handing out the bracelets gave us a look and said only “the pros” get blues. *sigh*

After a quick bag drop and a decently clean porta-loo, we lingered near the start corrals during the warm up and made our way up to the front for the start. Some confusing instructions (stay in your lanes, merge into the other lane, use the whole path, stay on one side) and a start air horn that didn’t work, we were off with some fantastic support lining the first few kms.  Nova casually mentioned right before we started that she has ran a 46 minute 10k before, and so I let her gallop off. With all the weaving at the beginning it just wasn’t the place to try to run with a group.  I was keeping pace with the 50 minute pacers who were great and had awesome music playing from their speakers (Pitbull! Worldwide!). They were also constantly checking their pace to make sure it was exactly on track which I really appreciate in pacers (take your job seriously please).

Around the 2km mark there was a tight turn and we doubled back on  the route and I realized how lucky I was to be out front. The mob of runners was packed and I saw tons of speedy girls “stuck” around behind the 60 minute pacer. At this point I even saw Paula Radcliffe behind me.  If I’m beating the marathon world record holder there’s something amiss. (although at the time it was a huge confidence boost to my legs!). The course wove around Victoria Park, and as someone who runs that park almost every week, even I was L-O-S-T, but all the more mental energy to focus on my tired legs. I grabbed water at each stop and kept up with the 50 minute pacers thinking that even if I tire and lose them I’d still be on track to beat my 53:20 PB. The Run Dem Crew cheer zone just after the 3km/8km mark was insane. I’ve heard loads about their #mile23 support at marathons and could not have been more impressed with their signs, cheers and sheer number of supporters.  The cheers were loudest for RDC runners, but they were supporting everyone who broke a smile and it seriously carried my tired legs on forward.  Charlie Dark has seriously created a fabulous monster with all this #crewlove.

The rest of the race was a blur of inspirational signs (Dig Deep! You’ve walked further in heels on a night out!) and smiling husbands as I had the best personal cheer team of Alex and Nova’s husband Ed running around Victoria Park to see us 4 times! Since I usually run with Alex in this it was a nice to get the support from the sidelines.

At 9k I was done. At 9.5K I was seriously done, at 9.9k I saw the “sprint finish” sign and laughed, but as I crossed the finish line with the clock reading 49:something I was a mix of ecstatic and vomity.  The first person I saw was poor Debs from Exposure who was so nice and said congrats and didn’t shrink back in horror when I gave her a sweaty high five and said I need to go and vomit.  THAT my friends is how you get the attention of PRs 🙂

I grabbed the finishers glow stick (?) and bracelet with hair elastic (?) and avoided the vitacocoa to bee-line straight for the champagne. With a solid PB and my champagne hand full I was suddenly feeling less vomity and ready to celebrate.  Nova and I grabbed our bags and the kleenex and headbands being given out by Elle (nice touch as I was sweaty with uncontrollable hair at that point – well predicted) and after a quick wander of the after party headed out. 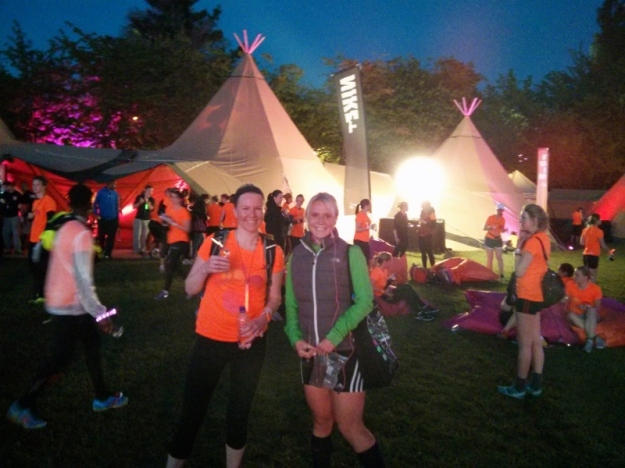 Why would we leave so fast? Well in all the wonderful organisation of the expo Nike wasn’t letting in supporters, only people who raced. I get that they couldn’t have just anyone showing up, but in my opinion they should have let each runner have at least 1 plus-one guest to come in. The beer tent and food trucks would have made a killing with all our supporters and us sticking around for the after-party.

During a quick photo opp with Team Naturally, Run I saw a moment that summed up the whole night for me. Team Naturally, Run member Becki came up to give Charlie a big hug and a thank you for her support in her getting a PB at the race.  Leah had put together such a great group of runners that we were not only looking to the team for support, but helping each other. *tears* I also got emosh when one of the last runners on the course ran past the crowds at the exit area and there was a cheer that blew Jessica Ennis’ super Saturday out of the water.  The determination of this runner inspired everyone out there and I realized that even with the quirks and mistakes made in organisation, it was still a race that people were pushing their limits to reach goals for.

So, taken for what it was and the fact that Nike will always put on a good event first and actual run second, I had a stellar night and am so happy to be a part of Team Naturally, Run (and now a sub-50 10k runner! Eeeeekkkk!)