I have a few running PBs that I’m pretty proud of and can list off when required (not in my twitter bio thank you) but also started to wonder where I’m at right now with my running.

I ran the Assembly League Battersea a few weeks ago to see what my 5k time was on a flat, fast and accurately measured course. It helped that it was a free race with my club and chock-a-block with speedy runners to pull me along. 23:51 later I was gasping for air in the finishers chute the 281st out of 307 finishers. Run with fast people and you will get faster. 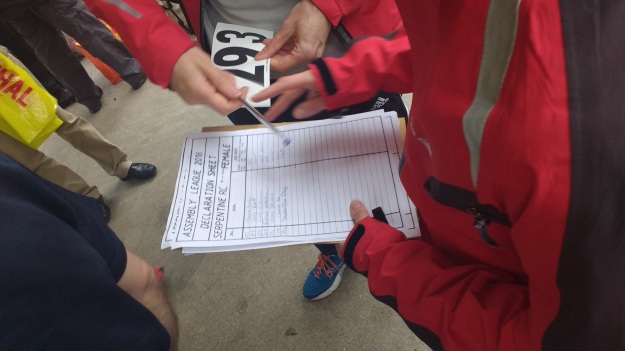 Keen to set some more standards I went to my first T&F practice, also at Battersea, and got to try out some events and receive coaching on technique.

First up was Steeplechase, my dream sport, and after a few climbs up and over the barriers, we were set off to practice hurdling them and techniques for the water pit. From there we went to the high jump and after a few jumps without the bar, cleared the bar at 105cm, which would at least get me a scorer point at our competitions. Our hammer and javelin practice had to be postponed due to thunder and lightning, but that just meant more jumping and steeplechase practice.

On Sunday I ran the London City Mile, always a favourite race since I always see a lot of running friends and non-running friends who want to “give a mile a go” with a medal at the end.

I’ve been doing a bit of training specifically for the mile, and hope to set a PB at the Serpentine 1 mile championships later this summer. I didn’t do a long run on this weekend and decided to push hard at this road mile to see how close I was to my goal time.

Trying to avoid the guy who thought it was a good idea to wear a speaker backpack at the race (it’s never a good idea) I started near the back but weaved my way through the speedy starters who inevitably slowed down as we turned around the Bank roundabout. Hearing a few cheers for Canada (Thanks Mike!) kept me going and when the finish looked close but the sign said 400m, I knew I just had to keep pushing. Miles are hard yo. Finishing in 6:47 with a new PB and close enough to my goal that I think I’ll be able to hit it on the track later this summer.

So, it’s been a fun June trying new things, setting some current standards, and getting a PB along the way. Most importantly, it’s been fun.

1 thought on “setting my standard”