I was a last minute invite to The Globe;s production of King John last week.  They had organised a “bloggers night” to get the word out about the Groundling tickets available for each performance. With over 700 tickets available at £5 each, you can stand in the yard of the Globe and watch the play from there. 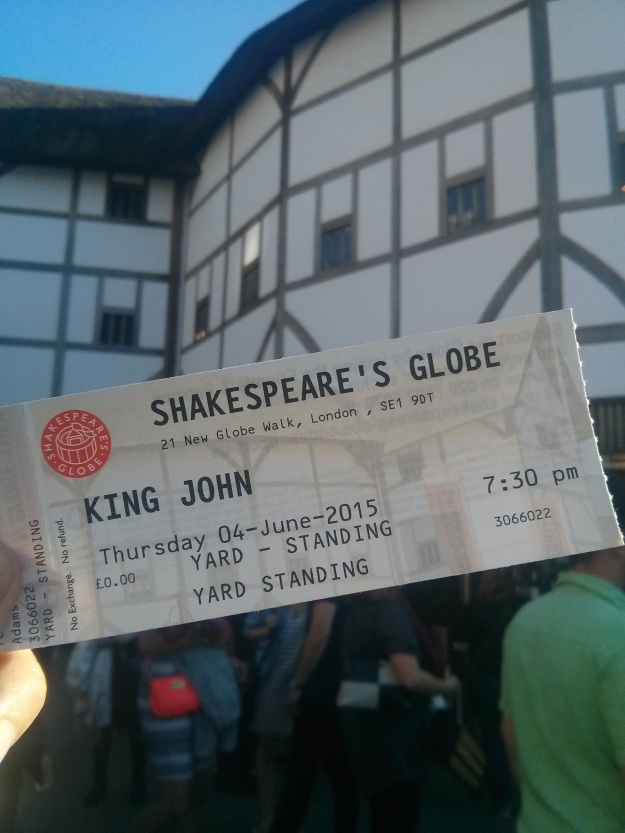 As someone who stands all day at their desk I didn’t mind standing for the show, but there were a few uncomfortable faces around us just before the interval. Last summer we went to a show during a heat wave and saw a few people even faint. I wouldn’t normally suggest a certain fitness level for going to a play, but do think if you can stand for 3 hours.

We were given a complementary drink before the show and then bought some burgers (who can stand for 3 hours without proper fuel?) from the Globe BBQ.  Once the show started we found a spot right by the stage and enjoyed one of Shakespeare’s lesser known plays that we didn’t know much about.

It was a great way to spend a warm summer’s night out in London, and I say that from my past 5 experiences at the Globe, not just this one I was invited too. Each year we make an effort to catch a play after work one night and it’s one of those London traditions I really like.

The Globe invited Alex and I to attend the play (at the last minute when a couple of other bloggers dropped out!) and gave us the complementary beverages & grounding tickets.