We had our trip planned to Olso for a few months. The week before I googled “Oslo events 23 May” and the ecotrail Oslo trail race popped up.  We were not planning on running a race while we were there but a few things swayed us:

So, we signed up on the last day possible and hoped for the best.  Being the first year the race was held in Oslo, it was fun to see how excited the organisers were leading up to the event.  We picked up our race numbers at a local sports store (and got to taste some delicious Sweedish blueberry soup which you get at most Sweedish ultras apparently). Like everything in Norway, it was efficient.

The 80k race started at 10am, and the 45k & 18k races started at noon. It seemed slightly odd to me that in a city where the sun rises at 4:30am, we waited half the day to start running, but it also stays light for longer so no need to rush I guess.  The route was a big circle and the 45k & 18k started those distances from the finish at the 80k checkpoints.

The ecotrail races are big on having zero impact on the environment. So, while there were checkpoints with supplies, they were minimal. Only 2 on the whole course and none for the 18k section. You were told beforehand that you are expected to bring all your own supplies, know the route and surrounding train stations if you need to drop out, and to bring a small bag to collect your rubbish and any you see on the trail. I am all for this approach in running and wish more races would do that (even in urban settings). 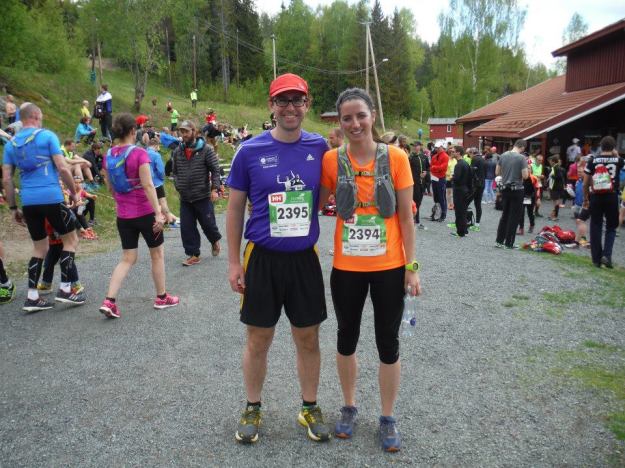 The 18k start was very easy to get to from Oslo, taking the metro out East and then walking 2k to a sports field in Fossum. The 45k started at the amazing Hollmenkollen ski jump which I’m glad I didn’t know beforehand or probably would have entered just for that. We arrived with lots of time to use the plentiful toilets and throw our bags into a van.  There was a good mix of people doing the 18k run and I was happy to see that over 55% of participants were women. (with only 18% of the 80k runners Women I hope there is a trickle-up effect in this race in the next few years).  The race director met us on the sports field to give a quick introduction and description of the course and then with a short count down we were off. Around 400 people on the initial narrow trails made for some slow going but no one seemed to be there to set a personal best. It took some time to pass the 2 Norwegian stags (men not deer) running in various amounts of fancy dress, which made me laugh that an 18k trail run was a legit Norwegian way to have fun.

The first few km of the race were along a dirt/pavement path along a river and golf course.  We crossed a few bridges and saw some waterfalls and ran in and out of the forest back towards Oslo.  The next 4 km of the race were on technical trail. Not UTMB technical, but single track very short and steep (most inclines were above 30%) climbs.  Norwegian flat seems to mean going straight up and then straight down and then flat a bit and then repeat. I absolutely loved it and felt awesome on the trails. The last KM of trails started to feel a bit much in the ol’ bums & quads and I knew the rest of the race was going to be more painful than I thought.

We had been following the Lysaker river back to the Olso fjord and once we hit salt water we took a left along the coast towards Oslo city centre. The trees and cool river breeze had been so nice that it was a shock when we hit the sun drenched tarmac.  At 18* it wasn’t a heat wave but, did take it out of me more than usual.

The path met up with a beautiful beach and then along a stunning seawall with views of Oslo and the entire fjord. Unfortunately after that the path followed a motorway for quite a few kms which was less scenic and more annoying traffic-y. It wasn’t my favourite part of the race at all and I might have had a small tantrum at one point. Alex was the only witness so we’ll see what he says about the situation…

The route when through the very busy Aker Brygge seafront area which was more about finding a way through the tourists out on a sunny Saturday than any actual running, looped under the fort and along the water to the Opera House.  I wouldn’t trust the km markers in any trail race, but these ones were definitely suggestions so the “last km” seemed especially tiring. 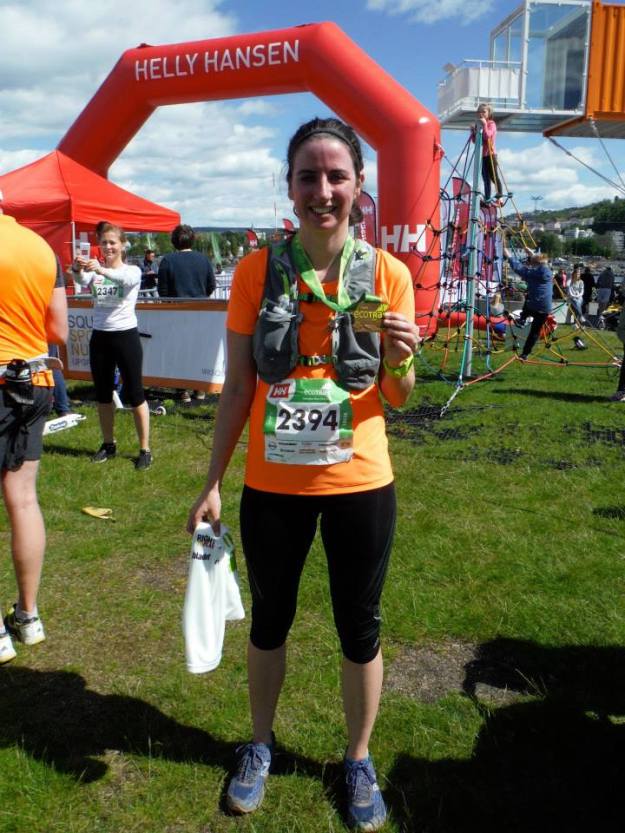 The finish line was up a small incline (typical Norwegians) and onto an island just off the Opera House, which as far as finish lines go was stunning. The whole island was a race zone with shops set up, food tents and amazing free massages. Alex and I set up camp for the afternoon and enjoyed watching the rest of the 18k finish, the 45k and even saw the first finisher of the 80k, Emmanuel Gault, who seems to win every trail ultra in Europe.

The food at the end of the race was top quality. I was so impressed with the chicken soup, coca-cola, burgers, chocolate, and sandwiches. The event could have used some beer, but being so expensive in Norway I can see why there wasn’t any. After finding a place on the island where beer was £18, we decided to pass and go off looking for a more affordable pint. Which, we surprisingly found on the steps of the Opera House terrace. A perfect sun trap and place to enjoy a £8 pint.

It’s no secret I love running races on holiday, and this was the perfect race to fit into our weekend. I loved the approach and organisation of ecotrail Oslo and would definitely recommend it to anyone as a trail-run-while-in-a-city getaway option.  I wish we had more time to discover the trails and rest of Norway, but there’s always next time.

While we were in Oslo we ate at two amazing places that were delicious and affordable.  Arte Pazza has super fresh made takeaway pizza and Illegal Burger has great burgers for post-race celebrating. Plus their house beer Illegal Mikkeller is really good.  Speaking of beer, be sure to visit Oslo Mikrobryggeri AS, the delicious micro brewery. Their beer is worth it! 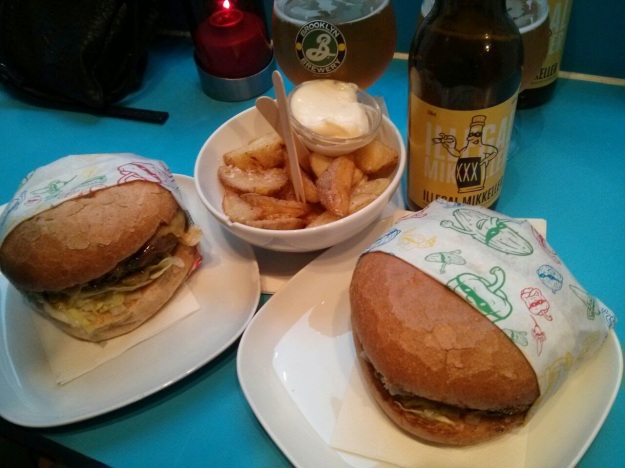