I spent the last 8 weeks training to run a sub-1:50 half marathon.  On Sunday I did not run sub-1:50 nor a half marathon – but I still learned a lot about what it means to set a goal and run fast, probably more than if I had actually hit my goal. 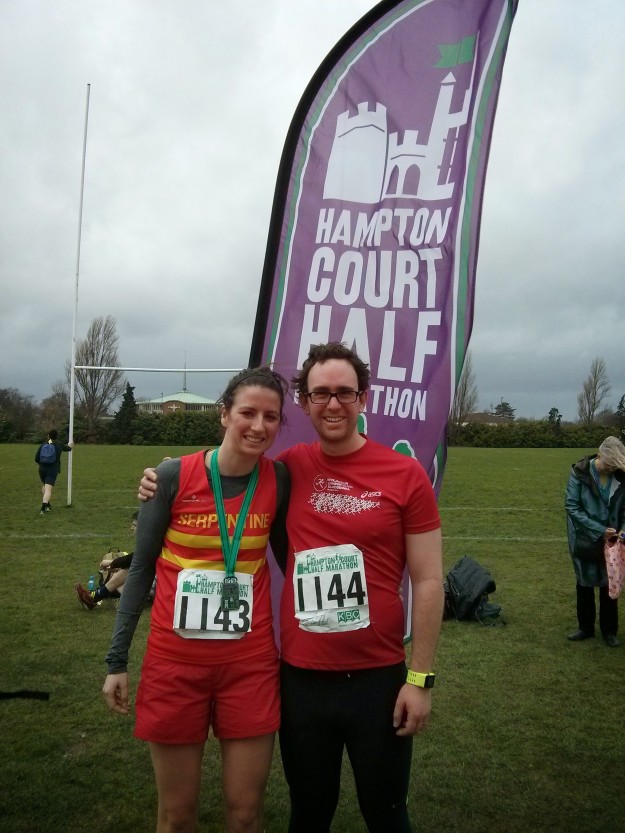 First, the race. A new half marathon in the London calendar, the Hampton Court Half looked like a great race for those who were left out of the Bath and Brighton registration chaos. The past few years have been lacking half marathons around the Capital, so seeing this and Run Hackney as new races in 2014 pleases me greatly.

The race started early to avoid busy roads, as a non-closed road race this meant we’d be sharing the road with… well everyone.  The early start wasn’t a problem for us though as it was timed perfectly with trains coming from Waterloo. A quick train and a 5 minute walk and we were in/out of baggage & registration within minutes.

As we corralled into the starting pen the group was divided into two waves. We were literally the last of the people to go in the first wave and set off around the neighbourhood for our first few miles.  My plan was to start my GPS then immediately turn it off for the first 2 miles running at effort pace. Alex and I stayed together for most of the first 2 miles but in the dodging around we lost each other around mile 3. The parts of the route that went along public footpaths were lovely but soon we were back on the motorway for a long stretch to the river.  As we crossed the Thames at Hampton Court I saw Simon & Polly being excellent cheerleaders and telling me I could still win the race. Perfect! King Henry VII was also there giving out high fives.

The next few miles were the best of the race. Along the (very dry) Thames Path and with a slight tail wind. I felt strong here and was hitting my pace right on, the route was still a bit busy (I usually find half marathons space out around mile 5) but there was always room to run. Under and then over a bridge into the weirdest part of the race where we pretty much ran through a mall.  A lot of twists and turns through back lanes and around a small park until we turned back along the Thames to head for home. Well, try to head for home. That lovely small tailwind had turned into a pretty strong headwind for us and although nothing like the gales of weeks past, it wasn’t the most comfortable to push my pace in.  We were also running along another motorway on a narrow sidewalk so there wasn’t much to spur me on. I made a promise to at least keep under 9:00 miles during this harder part, and kept that but at mile 10 I looked at my time and did some running math to figure out I needed to run exactly my 5k PB to get sub 1:50.  I had a mini debate in my head but didn’t want to push that hard OR give up and cruise in.. so I just kept going!

The mile markers had been 0.4 off my Garmin since Mile 2 which I found oddly consistent. I was half dreading the “longest mile” but knew I couldn’t do much about it so just kept smiling at the symphony of Garmin beeps when the real mile markers were.  Turns out the race was short from just near the beginning so there was no reason to worry.

I wasn’t feeling my strongest near the end of the race, which I am taking as a sign I need to keep working and training to get stronger if I’m going to hit this run-faster goal. But I finished with a smile* on my face and running happy which is the goal of every race, and every run, I do. I hadn’t been very well the week before the race and had to stop a few times to “catch my brain” (what my friend calls feeling faint) so I’m glad I finished in one piece and close enough to my goal to keep working towards it.

*Simon caught my “finishing with a smile on my face” moment when I was clearly not smiling. 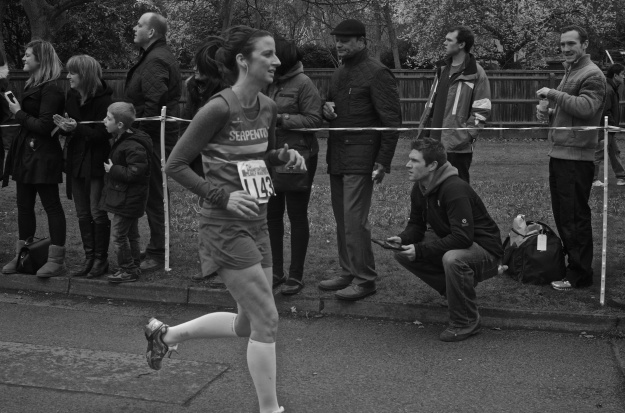 Of course after the race we went to the pub to celebrate Laura’s birthday AND watch Team Canada win the Olympics… er win the Men’s Hockey Gold Medal AND fill up on all the roast and crumble possible. 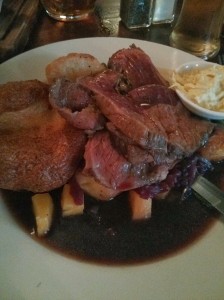 I had a great time at the Hampton Court Half Marathon, I was lucky in that I wasn’t coming close to my PB so the short course didn’t bother me.  That said I think there are some things that both the race organisation and the athletes can do to make it a better race experience next year, so I look forward to 2015!

11 thoughts on “my Hampton Court Half Marathon”